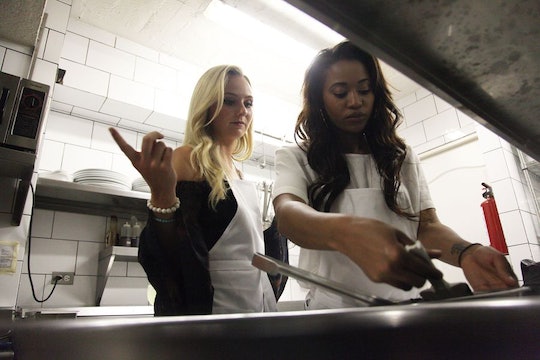 Jubilee Called Out Ben Higgins During 'The Bachelor' Spanish Lesson, And It's Totally Refreshing

So far on this season of The Bachelor, former Army Vet Jubilee has been having a rough time in the house. The center of many a girl fight, Jubilee has had to deal with several of the girls (hey there, Amber!) turning her into the villain the moment she gets too much time with Ben. Remember when she decided to give Ben a massage after he found out two of his family friends died in a plane crash? Yeah, it was like she signed her death warrant with that one. But on Monday's episode, she showed yet another reason that she's such a great addition to The Bachelor: Jubilee called Ben Higgins out during the group date Spanish lesson.

If the pressure in the house wasn't enough, on tonight's episode Jubilee started grappling with the signature jealousy that plagues just about every contestant who has ever competed with 25 other gorgeous singles for one person's heart. And when she called Ben out on fanning that flame, she pretty much called out every Bachelor ever.

We hear you, girl.

This week, Ben surprised the girls with a destination trip to Mexico City, where several cultural-themed dates were planned from there. Jubilee found herself on the group date, where tensions from previous weeks, and the envy she inevitably felt began to surmount. As the girls are tasked with learning a bit of Spanish, Jubilee admits to feeling less than enthused about the group setting.

"I hate seeing Ben around other girls," she said. She even through daggers Becca's way the moment she got close to Ben.

But when it was Jubilee's turn to practice some Spanish with Ben, she used their moment to call him out instead.

"I just don't feel like this means anything because you want to kiss everybody," she told Ben.

Jokingly, Ben told Jubilee he loves her in Spanish, to which she replied, "You said that to the last four girls."

All the while, Twitter was a-buzz with Jubilee's dose of major truth.

In a way, it's hard not to ask, what did she expect? When you're on The Bachelor, it's pretty common knowledge that all authenticity that usually comes with the normal dating experience is forsaken for wine-drunk girl fights, treachery, and five second windows of "connection." From the beginning, it seemed like Jubilee couldn't quite get the way the show worked. Between having a difficult time relating to the girls, to feeling uncomfortable on extravagant dates (we like hot dogs too, don't worry Jubs), finding love in the midst of all this chaos just didn't seem right for her.

But think about it: if you were fighting off many many other women just for one dude, wouldn't you call him out too? It's a staple of each season for the Bachelor or Bachelorette to kiss just about everyone, but how much does that actually help the process, and how much of that is staged for TV? We totally get it, Jubilee. Bachelor life just ain't fair.