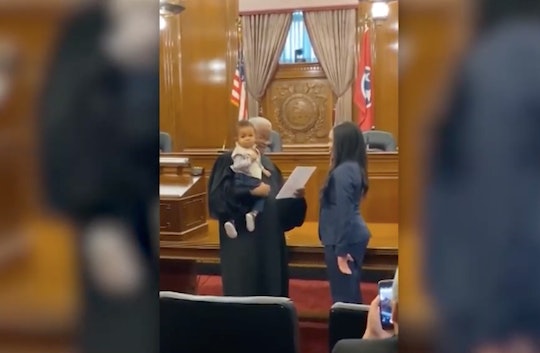 Balancing motherhood and a professional life is never simple, but the load can be made a lot lighter through compassion from those around you. In a now viral video that is sure to restore your faith in humanity, one special judge held a lawyer's baby while he swore her into the state bar in Tennessee. Bouncing the baby as he read her the oath, Tennessee Court of Appeals Judge Richard Dinkins stole hearts and showed the power of community in one fell swoop.

The video appeared on Twitter, posted by a user named Sarah Martin who said they went to law school with Juliana Lamar, the mom in the video, and shared it with her permission, according to The Hill. "Y'all," she wrote on Twitter. "Judge Dinkins of the Tennessee Court of Appeals swore in my law school colleague with her baby on his hip, and I've honestly never loved him more." Martin said in another tweet that Lamar delivered her baby while still in law school. What's more, it was apparently Judge Dinkins' idea to include the sweet 1-year-old in the ceremony.

"On the day of my swearing-in, right before we began, Judge [Dinkins] said he wanted Beckham to take part in the moment," Lamar told BuzzFeed. "And I am so glad he did — because to have my son take part in one of the greatest moments of my life was truly a blessing."

People were understandably enamored with the video, praising both Judge Dinkins for his willingness to include the baby and Lamar's general badassery for being both a mother and a lawyer. Many pointed out that the judge had perfected the baby bounce and doesn't miss a beat throughout the process. "And that's a professional baby bounce, too. The rhythm and consistency tho!," one person tweeted. "And he knows just what to do with that baby!" said another.

But despite how flawless this video is, Lamar's experience of becoming a mother in law school was far from an easy one. She had to be back in class a week after undergoing a C-section — you know, major surgery — because there was a limit on how many days of class she could miss. "The pressure I felt was horrible, and I hope it has led my law school to rethink its policies for future mothers," Lamar told BuzzFeed. "I understand having a child during law school is often a choice — however, as young female professionals, there is not a perfect time for us to have children."

Unfortunately, that pressure on moms in the law profession doesn't end at law school. Women make up nearly half of associates in private practice, but only 20% of partners, according to the American Bar Association. On top of that, the National Association of Law Placement Foundation found that two-thirds of female associates will leave their positions in law firms within five years, according to The Atlantic. And why do they make that decision to leave? It is at least partially explained by the inflexibility and high demands that they face in traditional law firms, according to a recent report from the University of California Hastings School of the Law.

As for Lamar, she cited her husband, Javon — who is serving in the Army at a nearby military installation — and her mother for helping her through the difficult years of law school, according to The Hill. But Judge Dinkins had reportedly been a "guiding light" to her throughout as well, including the years that she worked for him as a clerk in the Tennessee Court of Appeals.

From here, Lamar is on to her next step professionally, a two-year clerkship with the state trial court, she told CNN. "I hope that this story gives other young women and young mothers the inspiration to know that you can do it, even if you're faced with a crazy attendance policy or you're just worried that you can't do it," she told CNN. "If I can do it, literally anyone can do it."

I think we can all use a little more inspiration. Thanks, counsellor, and congratulations!