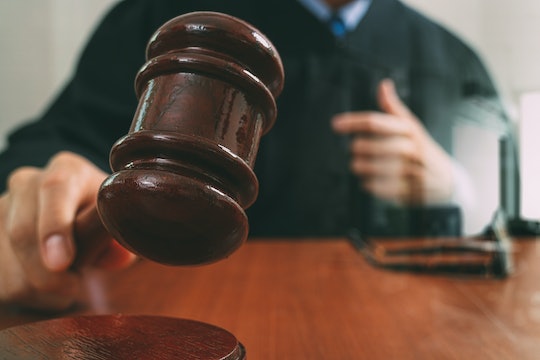 A family court judge in New Jersey is under fire after arguing that a 16-year-old boy accused of raping an intoxicated girl at a party, recording it and sending the footage to friends, deserves leniency because he comes from a "good family" and had "terrific grades" that could land him in an elite college, The New York Times reported on Tuesday. Superior Court Judge James Troiano had denied prosecutors' request to try the teen as an adult in the case; prosecutors argued the teen's behavior regarding the alleged offense was "calculated and cruel." The judge's decision has since been reversed by the state's appellate court.

According to an appellate court ruling, both teens were drunk when they walked into a "closed off darkened area" in the basement where the party was held, noting that Mary was "visibly" intoxicated, "her speech was slurred, and she stumbled as she walked." When Mary was on the couch, according to court documents, a group of teen boys allegedly sprayed her bottom with Febreze and "slapped it with such force that the following day she had hand marks on her buttocks."

In the dark room, G.M.C. allegedly "filmed himself penetrating Mary from behind on his cell phone, displaying her bare torso, and her head hanging down," court documents state. When he was finished, G.M.C. left Mary in the room, where she was "on the floor vomiting." Some of G.M.C.'s friends when to check on Mary and then informed her friends she was sick. A friend's mother then drove Mary home.

The next morning, Mary — who woke up in torn clothing and bruises on her body — told her mother she was worried "sexual things had happened at the party," court documents state.

Following the alleged assault, court filings state that G.M.C. then sent the video to his friends, one of whom said the footage showed "Mary's head hitting repeatedly against the wall." According to court documents, G.M.C. then allegedly sent his friends a text that said, "When your first time having sex was rape." Mary learned of this video months later, and G.M.C. "denied having recorded the encounter."

In their arguments for why G.M.C. should be tried as an adult, prosecutors noted that he allegedly "engaged in vaginal intercourse with [Mary] while she was visibly intoxicated, physically helpless and unable to provide consent."

"Filming a cell phone video while committing the assault was a deliberate act of debasement," prosecutors said, noting that G.M.C's alleged conduct was both "sophisticated and predatory."

In December 2017, Judge Troiano, according to NJ.com, rejected their request. According to court documents, the 70-year-old judge questioned the "distinction" between sexual assault and rape, stating that rape generally involves two or more men, "either at gunpoint or weapon, clearly manhandling a person into an area where there was nobody around, sometime in an abandon[ed] house, sometimes in an abandon[ed] shed, shack, and just simply taking advantage of the person as well as beating the person, threatening the person."

Judge Troiano's definition of rape is not only problematic, but it's also inaccurate. According to the Rape, Abuse & Incest National Network (RAINN), rape is a "form of sexual assault" and though each state's exact definition varies, the FBI defines rape as "penetration, no matter how slight, of the vagina or anus with any body part or object, or oral penetration by a sex organ of another person, without the consent of the victim." And, as the Arizona Coalition to End Sexual & Domestic Violence points out, "rape and sexual assault can occur at any time, in many places, to anyone."

In response to the text G.M.C allegedly sent, Judge Troiano said "it really doesn't make a lot of difference because the whole paragraph to me is just a 16-year-old kid saying stupid crap to his friends." Additionally, Judge Troiano disagreed with prosecutors' argument that G.M.C's behavior was calculated or of a "predatory nature."

"This young man comes from a good family who put him into an excellent school where he was doing extremely well. He is clearly a candidate for not just college but probably for a good college. His scores for college entry were very high," Judge Troiano said, also detailing that G.M.C. was an Eagle Scout.

Romper's request for comment from the New Jersey Courts was not immediately returned, but a spokesperson for the administrative office of the courts told The New York Times Judge Troiano retired many years ago and "was asked to occasionally fill vacancies on the bench." Romper has also reached out to G.M.C.'s attorney, but did not receive an immediate response.

This case has sparked outrage on social media. One Twitter user said that Judge Troiano's decision and comments "perpetuated what is commonly called 'rape culture," and another said it's "appalling to see judges abuse their power like this." One more said this case is an example of what "privilege looks like."

The case of former Stanford student Brock Turner ignited similar backlash and concerns. In 2016, according to CNN, Turner was convicted of sexual assault of an unconscious woman and the judge who oversaw the case, Judge Aaron Persky, sentenced him to six months, though he only served three, a fraction of the prosecutors' six-year request. Judge Persky's leniency was widely criticized and he ultimately become the first judge in the state of California to be recalled in more than eight decades, according to the Los Angeles Times.

It remains to be seen how this specific case will unfold, but it's apparent that bias, problematic logic, and a gross misunderstanding of what constitutes rape and sexual assault are still very much a problem in the U.S. legal system and society as a whole.