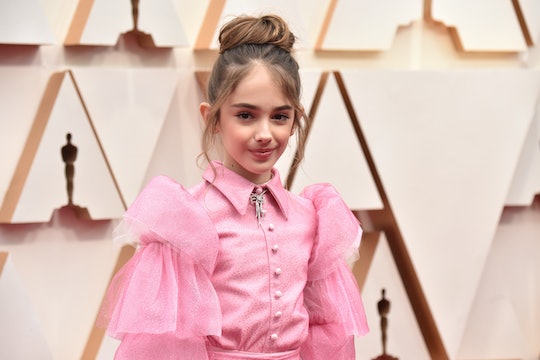 A girl needs a snack. Julia Butters, 10, brought a turkey sandwich to the 2020 Oscars, whipping out her dinner on the red carpet. The Once Upon a Time in Hollywood actress apologized to vegans in the crowd and said, "I put a sandwich in my bag... Sometimes the food here is not for me."

I think we've all been to a formal event where the food left something to be desired; props to Butters for coming prepared. Among those culinary temptations served at the Oscars are smoked salmon Oscar statues, apple and vegetable spring rolls, and homemade tofu. None of the 10-year-olds that I know would be willing to eat any of that, so a turkey sandwich doesn't sound completely crazy as a substitute.

Following the awards ceremony, celebrity guests will head to the Academy of Motion Picture Arts and Sciences' official post-Oscars celebration at Governors Ball where they will enjoy a primarily plant-based meal, with 70 percent of the offerings being vegan dishes, Hello reported. I think those vegans that Butters apologized to will have plenty of options to enjoy.

Another main focus of the menu is on custom cocktails. Bartender for the evening, Charles Joy, told Hello! that the evening will have 12,000 speciality cocktails. At just 10 years old, Butters will also be unable to enjoy that aspect of the evening, so maybe she has a juice box in her bag as well.

Butters is far from the first celebrity to bring a snack or two along with her to an awards ceremony. In 2020, Lilly Singh used Skittles as a snack and a purse. Jimmy Kimmel is the king of blessing Oscars audiences with candy. And at last year's Golden Globes, Melissa McCarthy snuck in 40 ham and cheese sandwiches to pass out to her friends. What's a single purse sandwich compared to that?

Along with her cute little purse-turned-lunchbox, Butters arrived to the event in a bubble gum pink dress with a high bun. She most recently starred in Once Upon a Time... in Hollywood alongside Leonardo DiCaprio and Brad Pitt. The film was nominated for 10 Academy Awards, including Best Picture and Best Director, but Butters' sandwich surely wins Best Accessory.