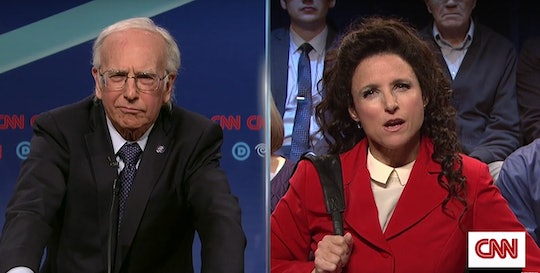 Vermont Sen. and Democratic presidential candidate Bernie Sanders wants to impose higher taxes on the very rich, and that may not sit too well with the stars of some popular 1990s sitcoms. At least, that's how Saturday Night Live summed up the dynamic between the skit version of Bernie Sanders and iconic Seinfeld character Elaine Benes, played by Julia Louis-Dreyfus, who hosted the show this weekend. In a spoof of Thursday night's Democratic debate, Seinfeld co-creator and actor Larry David and Louis-Dreyfus reunited on SNL and it was perfectly hilarious.

During the questions-from-the-audience portion of the debate as portrayed in SNL's cold open, Rachel Green from Friends almost made an inquiry of the candidates, and David's Sanders shut down one from Cliff Huxtable, formerly played by accused serial rapist Bill Cosby in The Cosby Show ("I need black voters, but not that bad," faux-Sanders lamented).

But Louis-Dreyfus' Elaine Benes' question about taxing the rich hit the mark. "But wouldn't that be bad for actors who made a lot of money on a certain very successful sitcom?" she asked. "Wouldn't it be even worse for the person who created the sitcom? I mean, wouldn't he lose a lot of money? Do you see what I'm sayin'?"

David's Sanders did, of course. David teamed up with Jerry Seinfeld to launch Seinfeld in 1989, so he probably remembers the show's success pretty well (just sayin'). Even before that dig, though, Benes — in her very '90s red blazer — had another question for Sanders, one that was much more pertinent to the election in 2016: How, exactly, do you plan to break up big banks?

“Once I’m elected president, I’ll have a nice schvitz in the White House gym, I’ll sit them down and yada yada yada, they’ll be broken up,” Sanders replied.

Benes accused Sanders of yada yada yada-ing over the best part. Then, she told Kate McKinnon's Hillary Clinton that everyone knows she's the funniest, er, most qualified candidate, anyhow.

"Well, what the hell am I?" Sanders explodes, prompting Elaine to yell "You're bald!", a favorite Seinfeld tagline.

In real life, the April 14 Democratic debate has been regarded as the most contentious one yet, with the candidates sparring over issues like the minimum wage and super PACs as a boisterous crowd in Brooklyn reacted loudly. Luckily for us, SNL's "real New Yorkers" actors stepped in a couple of days later to ease some of that exhausting political tension.

In the end, David as Sanders acquiesces to Elaine, realizing that he did, in fact, make lots and lots of money off Seinfeld. "You should vote for her," he says, gesturing to McKinnon's Clinton.

But even in a world in which we receive treats like Julia Louis-Dreyfus and Larry David's reuniting on Saturday Night Live, it would be a rare day indeed to witness that kind of camaraderie from our politicians. Here's hoping.