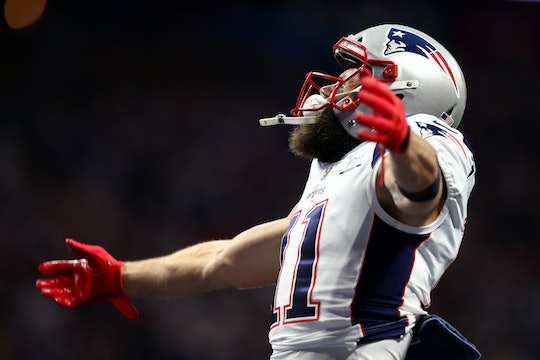 Here's Why Julian Edelman's First Half Made Super Bowl History

Super Bowl Sunday is always a day of emotions running high as the two best teams of the season go head to head to see who comes out on top. And for a few select players, it's also a day for setting records. This time around, it was Julian Edelman who made history during the Super Bowl. As ESPN reported, and New England Sports Network relayed, he was the first player in Super Bowl history to rack up at least seven receptions and 75 receiving yards in the first half. Consider us three-quarters impressed.

On Sunday, Feb. 3, the first half of of Super Bowl 53 proved to be history-making for the New England Patriots wide receiver. According to ESPN, Edelman was "arguably was the best player on the field at Mercedes-Benz Stadium" during the first half of showdown between the Los Angeles Rams and the New England Patriots. To be exact, the seasoned receiver made seven catches for a total of 93 yards before halftime. This guy was on fire.

But wait, it doesn't end there — Edelman also claimed another spot in history. That's because he now rests at second place on the all-time postseason receiving yards list, according to NBC Sports. Going into Sunday's game, Edelman only needed 45 yards to beat out Dallas Cowboys' Michael Irvin (1,315 yards) for second place. The wide receiver managed to accomplish this in the second quarter. Unfortunately, it's a long shot for Edelman — or anyone for that matter — to ultimately top the list of all-time postseason receiving yards. That's because San Francisco 49ers' Jerry Rice sits comfortably at the number one spot with a record of 2,245 yards. (Which is just insane.)

Still others pointed out that none of these catches resulted touchdowns. One Twitter user wrote, "And? None led to a touchdown. Personal records don't mean much if you can't convert to points." Which is technically true. But still! Way to rain on someone's parade.

When it came down to it, though, Edelman did end up being named the MVP on Sunday. According to the NFL, he made a grand total of 10 catches for 141 yards during the showdown with the Los Angeles Rams. Eight of these receptions resulted in first downs.

Clearly, Feb. 3 was an amazing night for Edelman, Between the Patriots' big win, his two impressive records, and being named MVP, I have a feeling this wide receiver went bed very happy.