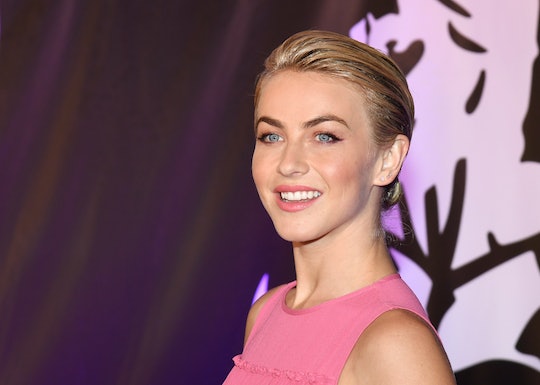 Julianne Hough, actress and former Dancing with the Stars pro, knows all too well the struggles that go along with endometriosis. For nearly two-thirds of her life, she's struggled with this debilitating disease, not knowing when the pain would strike. And while she has things mostly under control, there is one aspect of life that still give her a challenge — sex. Julianne Hough spoke frankly about her life with endometriosis in her most recent interview and things got real.

More Like This
Lightning Crotch Can Actually Tell You These 7 Things About Your Pregnancy
Therapist Says: Alone Time For Moms Is A Necessity, Not An Indulgence
If A Tick's Head Gets Stuck When You're Pulling It Out, Here's What To Do
Um, "Rusty Pipe Syndrome" Is A Thing, & Every Breastfeeding Mom Should Know About It

"I first started experiencing symptoms back when I was 15, but I thought it was just what it feels like to be a girl with bad periods," Hough said. "I didn't think to go to the gynecologist. Because I’m a competitor, I felt like I had to push through the pain and just work."

Endometriosis is a condition in which the endometrial tissue that makes up the lining of the uterus grows outside of the uterus rather than only within the uterus. And it causes severe, chronic pain that peaks around a woman's period, according to WebMD. Women with endometriosis also have to contend with heavier periods, as well.

It can also cause pain when you're doing things like pooping or having sex, the latter of which Hough told Women's Health that she struggles with on a regular basis. Luckily, the Safe Haven star and her husband, hockey player Brooks Laich, have found ways around it.

"It can be really frustrating," Hough told the magazine. "There’s so much intimacy without actually having sex. There are some cool things we’ve learned and it’s literally been awesome."

While she didn't go into detail, for fans who also have endometriosis, the fact that she's so forthcoming about her experiences is likely much appreciated because it tells them that they're not alone in what they're experiencing themselves.

But, Hough hasn't always been this open about her struggles. After keeping it under wraps for so long, she felt she had a "responsibility" to talk about it and could use her voice, "to help other women so they don't have to go through this sort of like, silent, I'm alone situation, that there's actually an amazing community of women that are there for you," she told E! News last year during Endometriosis Awareness Month, which takes place in March.

Hough (and others with endometriosis) are far from alone in their experiences. It's estimated that one in ten women will suffer from endometriosis over the course of their lives, according to The American College of Obstetricians and Gynecologists. It's typically diagnosed in your 30s or 40s.

Currently there is no cure for endometriosis and doctors are still researching ways to treat it. Current options include medication and surgery, according to Healthline.

One of the biggest concerns with endometriosis is the possibility of infertility. But, Hough doesn't think it should hinder her chances of getting pregnant since her condition was discovered over a decade ago, according to E! News.

"The good thing is I found out that I had endometriosis when I did back in 2008 so I've been really lucky that I'm able to come across things that maybe could've been challenging in the future," Hough told the outlet. "But now that I know, and that I've had conversations with my doctor, we're good."

She is one of many other celebs who've shared their struggles with endometriosis including Lena Dunham and Padma Lakshmi, according to Self.

While life with a chronic disease may not be easy, Hough continues to keep her outlook bright. Just one look at her Instagram feed and fans will see that she's taking every measure necessary to live life to its fullest — endometriosis and all.