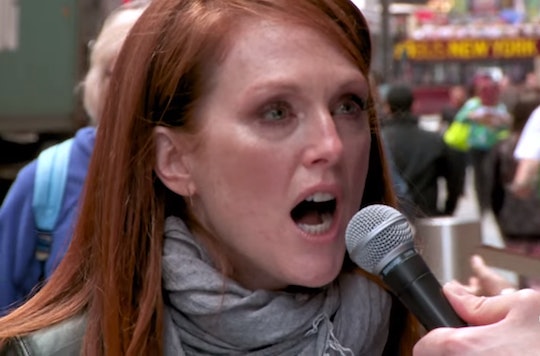 Billy on the Street

Julianne Moore has officially joined Michelle Obama and Tina Fey’s exclusive club of Women You You Already Loved, But Now Love So Much More Since They Appeared on Billy on the Street (or WYALBNLSMMSTAoBotS for short). If you’re not familiar with Billy on the Street – and you really should be – I’ll explain. Host Billy Eichner (Craig from Parks and Recreation) drags celebrities around New York City, yells in strangers’ faces, and makes the celebs do outrageous things, often for a dollar. Sometimes he also pays the strangers dollars. Billy loves dollars and yelling, basically, and he is wonderful. And the latest Billy On The Street with Julianne Moore is equally wonderful.

The latest episode takes Eichner and Moore to Times Square. Armed with lines from some of her most iconic roles, Eichner encourages Moore to perform monologues to entertain tourists, and more than once he shoves costumed characters out of the way in order to get at them. A bold move, considering the recent brawls Spider-Man, Minnie Mouse, and Hello Kitty have gotten into. Although you’ll have to send your kids out of the room in order to watch (she says the f-word more times in her Magnolia monologue than I’ve said putting together an entire household of IKEA furniture), it’s definitely worth it. Behold Mega Julianne Moore, more powerful than ever before: