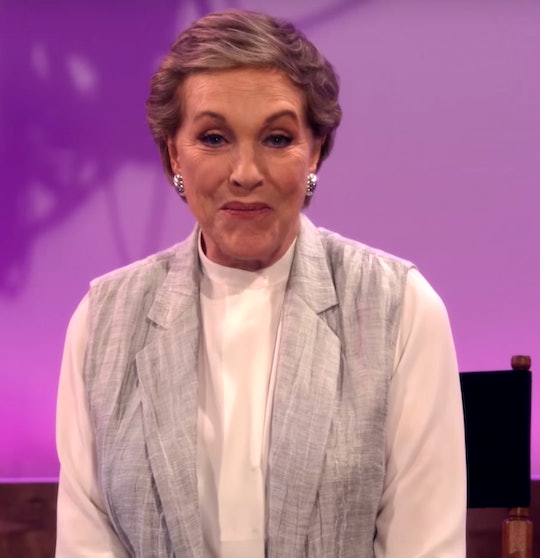 Julie Andrews' New Netflix Show Is The Best Thing Ever

When I was a kid, I was absolutely enthralled by the legendary Julie Andrews' performance as Maria, the effervescent nun turned serenading nanny for the straitlaced von Trapp brood in the iconic 1965 film The Sound of Music. I still get her energetic rendition of "My Favorite Things" stuck in my head sometimes. And while kids today absolutely should watch that movie (over and over and over again... ), they'll very soon have a brand new reason to adore the beloved purveyor of the arts, because Julie Andrews' new Netflix show, Julie's Greenroom, is going to premiere in the beginning of 2017 — and it's SO making me wish I were a kid again with how cute it all is.

More Like This
Tweens Will Be Obsessed With These 20 Podcasts
Vaccinated People Can Ditch Masks. Where Does That Leave Kids?
Apple Card Family: How It Works & What Your Kids Can Learn
Attorneys General In Nearly Every State Oppose Facebook’s “Instagram For Kids” Plan

Netflix announced the preschool series in a press statement on Thursday, and it's already clear that it's going to be epic. In it, Andrews will play Ms. Julie, the director of a fictional performance arts center dedicated to teaching a cast of original puppet characters all about all aspects of the performing arts, like miming, music, improv, circus arts, lighting, writing, acting, dancing, and more. The puppets are called the "Greenies," and, according to Netflix, they're a diverse bunch who will create an original new show over the course of the 13 half-hour-long episodes that will make up the inaugural season.

"This project represents the fulfillment of a long held dream to educate children about the wonder of the arts," Andrews said in a Netflix press release. But, although she's a total boss, she certainly won't be doing it alone. Just WAIT til I tell who the big names she'll be working with as guest stars, in addition to her "devoted assistant", Giullian Yao Gioiello, or Gus in the show.

Wait, does that say Ellie Kemper AND Tituss Burgess, stars of the hilarious Netflix sitcom created by Tina Fey herself, Unbreakable Kimmy Schmidt? Um, yes, so I'm now 24 and freaking out about a kids' show. I mean, Burgess is basically indescribable, in the best possible way:

Anyhow, Andrews created the show, which began shooting in May in Long Island, along with her daughter Emma Walton Hamilton and screenwriter and producer Judy Rothman-Rofe. Andrews is also executive producing the show in addition to starring in it. Oh, and did I mention that every episode will feature an original new song? Definitely mandatory viewing for all preschoolers when it premieres.