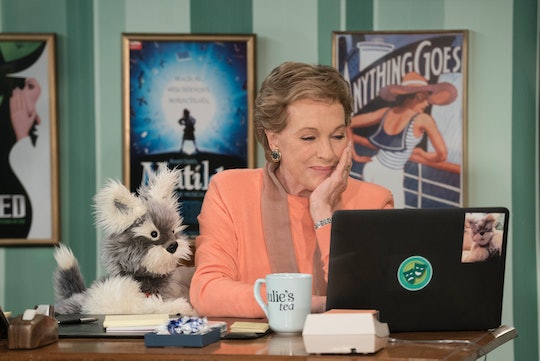 Julie Andrews Opens Up About Funding The Arts

With more than 70 years of experience in the industry, Julie Andrews knows the arts. Her career was built of performances that people now use as a foundation for pursuing their own career as an artist. And whether she is your Maria von Trapp, Mary Poppins, or Queen Clarisse Renaldi (or any other role she's tackled over the years), she has impacted and shaped the way we consume art across generations. And now, she wants to do the same for your children with Netflix's Julie's Greenroom.

For what feels like forever, the arts have struggled to maintain a seat at the table they so desperately deserve to be at. It feels like the go-to cliche in many movies where the school funding for the play, or the band, or the art department is taken away and the ragtag bunch of misfits who just want to express their creativity have to come together and save their passion through fundraising. But it's not a cliche, it's fact. And it's not a ragtag bunch of misfits, it's your child.

In an interview with reporters for her new children's show Julie's Greenroom, now streaming on Netflix, Andrews and her daughter Emma Walton Hamilton, who is a producer of the show as well, spoke about the importance of the arts in schools. In hindsight, the conversation proved to be more timely than ever.

"We really worry about the fact that the arts budgets are the first to be cut in schools these days," Hamilton says.

"Anywhere," Andrews says immediately following. "Can you imagine a world without music and dance and playwriting?..." Andrews asks at one point.

While it will take a lot of work to truly eliminate all form of art in the world, with the recent fiscal budget announcement, that day feels closer than ever. The day before Andrews' new show on Netflix hit streaming devices, President Donald Trump announced his proposed fiscal budget for 2018. In it, two things close to Andrews' heart were noted at great risk. As Huffington Post reports, the National Endowment for the Arts and the National Endowment for the Humanities are "among 19 bodies slated to be defunded entirely under Trump's proposal." That doesn't mean budgets are being cut — it means they're at risk of being obliterated.

"Can you imagine a world without music and dance and playwriting?..."

But what is the big deal with cutting the arts? In an article published on PBS.org, developmental skills like motor skills, language development, decision making, and cultural awareness were listed as just a few influential behaviors children who are exposed to the arts in a school curricula can obtain. (PBS is also at risk of being completely defunded through the Corporation for Public Broadcasting with the proposed budget.)

And, according to longitudinal studies published by the National Endowment for the Arts, students who regularly engage with the arts have higher grade-point averages, something that can lead to richer and fulfilling opportunities in the future. Also, for those that stand behind STEM curriculum, consider this: studies show that students who had art-rich experiences in high school were more likely to complete a calculus course than those who did not have an art-rich education, providing evidence that the arts can affect a child in many ways beyond art-rich programs.

But why is there so much hate for the arts to begin with? "Good art," as Hamilton calls it, makes you think. It can make you question "values and beliefs," and even influence the dialogue we have. "I think there's a certain movement right now to not want people to ask questions or challenge or think too much," she says.

"Or be uncomfortable [by art]," Andrews chimes in.

Speaking of uncomfortable, at the time of the interview, Melissa McCarthy had just made her first appearance as Sean Spicer on Saturday Night Live. "It's rattled the nation," Hamilton says, "And that's fantastic, but of course it's threatening to the people in power who would rather those things be nicely glossed over. That's the power and the gift of art."

The heaviness that is happening in the political sphere evaporates in Julie's Greenroom by leaving a safe space for kids to learn about participating in the arts, whether that be performing, writing, or working on the set. Through well-developed puppets that make up the cast (alongside Andrews herself, her assistant, and guests), children will be whisked away by the stories of their peers learning about the arts. Plus, just to add to the fun, there's also a duck.

"That's something that came to me one night, and I thought, 'Do we dare?'... The arts never discriminate," Andrews says about Hugo the duck.

There is something for everyone in the show — children, parents, and grandparents alike — to enjoy, according to Andrews. "We hope that parents or grandparents will be watching with their children — and they'll get the programs on a slightly different level than the child that is also watching," Andrews says.

You and your family can now stream the first season of Julie's Greenroom on Netflix and take in the stories of the puppets and the amazing guest stars the show invites on (Alec Baldwin, Ellie Kemper, Idina Menzel, Chris Colfer, and Carol Burnett are just to name a few).