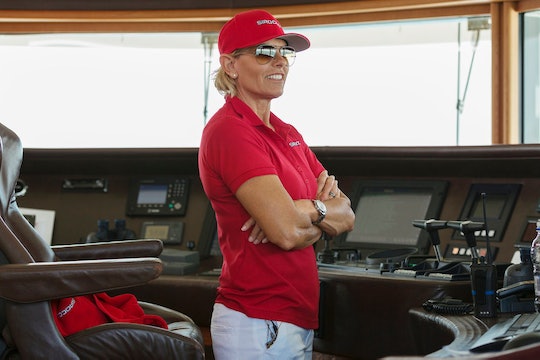 This season of Below Deck Mediterranean brought in June Foster as the third stew of the Sirocco. Since she's a new addition, it'll probably take a little bit of time for the rest of the crew to get to know her better. But fans of the show don't have to wait, because social media can give you some insight into who June is. In fact, June Foster's Instagram from Below Deck Med seems like a pretty good window into her life.

When June is introduced on the show, she explains that she's always been a bartender and server, but has a real love for travel as well. Yachting allowed her to combine her skills with her passion, and she'd been successful so far. She'd worked in the south of France for four months before signing up with Captain Sandy. The good captain is impressed by June's résumé, but June's Instagram bio reveals she has more than fine dining experience on her C.V. In addition to being a stew/deckie on yachts, June is a yoga instructor, conservationist, and author. She wrote the novel The Girl and the Golden Leaf, which, according to its Amazon summary, follows teenage twins Tia and Finn on a tumultuous journey that takes them from West Virginia to the Amazon rainforest.

June's Instagram is full of travel photos; there are blue skies and oceans as far as the eye can see. She has gone to Monaco and Indonesia as well as France and the UK, sometimes with friends but often on her own. In one post, she wrote about how much she enjoyed traveling solo. She said that you could find yourself waiting a long time if you held off on traveling until you had someone to go with. "Traveling solo with an open mind and open heart, while constantly seeking ways to help others along the way, is my favorite feeling in the world," June said.

Seeing the world certainly seems to be June's preferred pastime, and her Instagram account proves that she's managed to see a lot of it. When she's not sharing promo for her book, she's almost always near a body of water or on a balcony, soaking up the sun. She shares quite a few smiling selfies, too, but more often than not, June appears to be on some new adventure. It looks like yachting really does suit her lifestyle.

On Instagram, June provided a link to her personal website as well. The site revolves around her book, with summaries, reviews, and links to order your own copy. There's a book trailer, too, that hints at the dark turn Tia's tale takes, but contains enough scenic photos that it may remind you of June's social media. In the About the Author section, June reveals that she lives in Arizona when she's not jetting all over the world. She relishes "the opportunity to discover new destinations" and "experience new cultures," but states that child advocacy and conservation mean the most to her.

June may be the newest stew on Below Deck Med, but it seems like that's only one facet of her life.