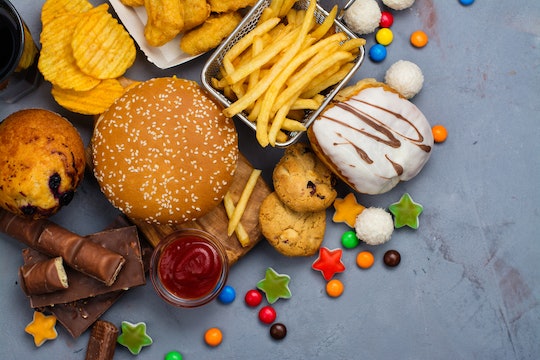 Junk Food Ads May Be Targeting Black & Hispanic Kids, According To New Study

If you've spent any time around kids, you know how often they tend to ask for junk food. But, is it possible that ads for fast food, sugary drinks, and other products are directed at certain populations? According to a new study, junk food ads may be targeting Black and Hispanic kids. This opens up a lot of interesting questions about advertisements and how even kids are getting treated differently based on what they look like.

Ads are almost a constant in our lives, now. According to a 2007 New York Times article, the market research company Yankelovich, Inc. estimated that each person is exposed to around 5,000 ads per day. But, that was back in 2007. Advertisements seem to have increased and kids are exposed to more screens, so imagine how many more ads they see day-to-day.

Previous studies have already addressed how ads, such as those for sugary cereals, impact kids' eating habits. But recently, researchers at the Rudd Center for Food Police & Obesity worked with the Council on Black Health at Drexel University and Salud America! at the University of Texas Health Science Center at San Antonio to analyze the targeted advertising efforts of restaurants, food, and beverage companies.

Their report, "Increasing disparities in unhealthy food advertising targeted to Hispanic and Black youth," illustrates a bigger problem than what previous studies addressed.

For the study, researchers looked at 32 restaurants, food, and beverage companies that spent over $100 million on ads directed towards kids and teens in 2017, as reported by Newsmax.

In a press release, the Rudd Center noted that the report found that 86 percent of food ad spending on TV shows that were targeted to Black viewers were for fast food, candy, sweet drinks, and unhealthy snacks. The report also found that these types of products were featured in 82 percent of ad spending on Spanish-language TV shows that same year.

"These companies are not just targeting black and Hispanic kids with their advertising, but they're targeting them with the worst products," lead author Jennifer Harris told CNN.

Researchers also found, as noted by the report's executive summary, that only 3 percent of ad dollars went to promoting healthier food options overall. But, according to the study, Black-targeted programming saw only 1 percent of that spending, and Spanish-language TV saw practically none.

"At best, these advertising patterns imply that food companies view Black consumers as interested in candy, sugary drinks, fast food, and snacks with a lot of salt, fat, or sugar, but not in healthier foods," Shiriki Kumanyika, one of the report's authors and the chair of the Council on Black Health, wrote in a statement, as reported by CNN, adding:

Not only are these companies missing out on a marketing opportunity, but they are inadvertently contributing to poor health in Black communities by heavily promoting products linked to an increased risk of obesity, diabetes, and high blood pressure.

This report helps reflect how, even as people discuss kids and advertising, not all kids are being exposed to the same products. That's important to remember, if you want to start talking about communities and children's health.