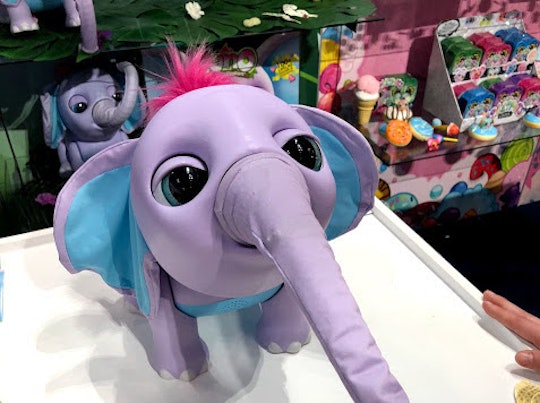 Interactive toys are having a major moment right now. From baby dolls that actually eat and poop to robots that can teach coding skills, kids love anything that makes play more than a one-sided experience, which is why Spin Master's interactive elephant toy, Juno, a new 2019 release, is set to be such a hit. Seriously, it's so realistic that your little one might lose all interest with going to the zoo.

An interactive elephant toy debut was definitely unexpected at the International 2019 Toy Fair in New York City, where llamas took center stage, according to Market Watch, and sloths appeared to follow up as a close second, but it was well received. The new Juno My Baby Elephant is a robotic elephant who can do almost everything her real life counterparts can, like pick things up with her trunk and hug with her big, flappy ears. But since she's a baby, the mini mammoth still has a lot to learn, which is why she needs your little one to encourage her with head rubs as she learns new tricks like learning how to play peek-a-boo and trumpeting with her truck.

My favorite thing about Juno is how much of a personality she has. Her mood changes, and her actions reflect them. As i4U reports, "the baby elephant reacts with over 100 sounds and movements," and her actions change depending on her mood and comfort level. She starts out shy when you first take her home, but as she gets more comfortable, all of her fun characteristics will shine through. For example, if you feed Juno her peanut when she isn't hungry, she'll toss it across the room, throwing a baby temper tantrum that will probably look familiar to any mom. She can also tell the difference between the things she picks up with her trunk because she's such a smart elephant — Juno might throw the peanut, but she'd never do the same to her mouse bff who comes with her, instead bringing her little pal up to her face to sing to him when he's in her trunk. Check it out in Idlehandsblog's YouTube video below which demos Juno's tricks.

As you can see, Juno is as as cute as she is smart, from her purple ears to big eyes. (I'm personally obsessed with the little tuft of pink hair on her head.) The video also reveals that you can switch Juno to cuddle mode by folding her back legs in, which limits her range of motion to just her head so she won't accidentally hurt your little one when she hugs and kisses them.

The smartest elephant on the block is designed for kids 5 and up, will retail for $100, and goes on sale in the fall of 2019, just in time for the holiday season. Plus, the live action Dumbo movie comes out March 29, so don't be surprised if elephant toys suddenly become hot commodities on your kid's wishlist once that film comes out. Here's to the rise of the elephant.