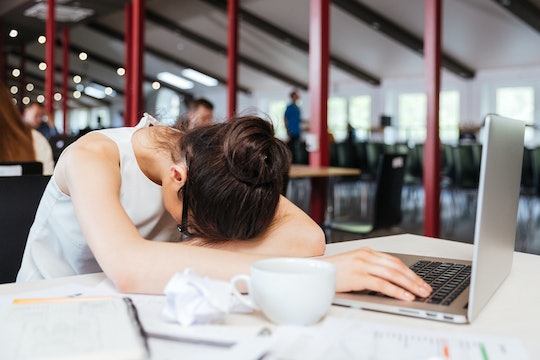 When Does Jupiter Retrograde End? Don't Expect Things To Settle Down Anytime Soon

If you're not particularly into astrology, you probably haven't given the planet Jupiter much thought since you made a model of the solar system out of styrofoam balls for your elementary school science fair. If you are an avid follower of astrology, on the other hand, you're probably aware that Jupiter is in retrograde right now. You might even be aware that this seemingly backwards pattern of celestial movement is occurring in the sign of Scorpio, which sets the stage for some major internal and spiritual changes. But when is this Jupiter retrograde over, and what does it signify?

The answer to the first question is a simple one. While Mercury retrogrades, for example, are more frequent and fairly short (the planet's current retrograde started on March 22 and ends April 15), Jupiter goes into retrograde just once a year for a period of several months, as astrologer Maressa Brown told Romper.

This time around, the largest planet went retrograde on March 8, and will stay that way until it goes "direct" on July 10. That's basically an entire season and-a-half!

The answer to the second question, however — what the purpose of this retrograde will have been — is a bit more complicated, as astrologer Pam Younghans of NorthPoint Astrology tells Romper.

"By the time Jupiter reaches the end of its retrograde phase on July 10, the planet will have backtracked to where it was on December 12, 2017," she says.

"To understand what that might mean, we need to look at how Jupiter in Scorpio has been manifesting. The same week in October 2017 that Jupiter entered Scorpio, the Harvey Weinstein scandal broke; in the weeks and months since then, we’ve been riding a tidal wave of revelations about others who have similarly abused their power."

She's right, of course: From comedians to politicians to CEOs and everything in between, it seems like every other day we're discovering that somebody allegedly did something awful to somebody else at some point, and whatever they did was likely covered up for a period months or years or even decades. As disappointing and infuriating as this time has been, however, it's also served as a catalyst for those who previously felt they had no voice to step up and start making some serious noise.

"The #MeToo and Time’s Up movements have played a major role, as more and more people are taking back their power and no longer living in the shadows," says Younghans.

And if it seems like the world is turning into the tawdriest of soap operas lately (perhaps even on a personal level!), well, you can blame Scorpio for that one, Younghans explains.

"During this time, we’ve also seen investigations unfolding of political figures and behind-the-scenes subterfuge," she says.

"Since Scorpio is the ruler of sexuality, power, and secrets, these events are textbook-case examples of how Jupiter’s magnifying glass works when in Scorpio."

Basically, this is the time when we can expect to see closets everywhere purging themselves of their skeletons (something to keep in mind if you've got any of your own stashed away). With Jupiter in review mode, Younghans says, it's "taking us back through the looking glass, to expose another layer of truth where we may have thought all had been revealed."

As an example, Younghans points to the recent scandal over the role Facebook allegedly played in Russia's meddling in the 2016 election. It's as if everybody's darkest mysteries are being unraveled, with Jupiter in the role of detective.

"No doubt we will see more in the days ahead, as Jupiter is playing bloodhound and picking up the trail — in spite of efforts that were made to cover tracks," says Younghans.

"And yet we’re not yet reading the end of the story, just a very intriguing middle chapter."

Will this rollercoaster tale end when Jupiter goes direct again in July? Not quite. Though it's safe to say still more previously hidden truths will likely come to light between now and then, we might have to wait even longer for the resolution we're seeking. As Younghans explains, Jupiter won't again reach the same degree where it was stationed retrograde on March 8 until the second week of October 2018.

"By then, the pieces of the puzzle will come together to create a clearer picture of all that was once hidden in darkness," she says.