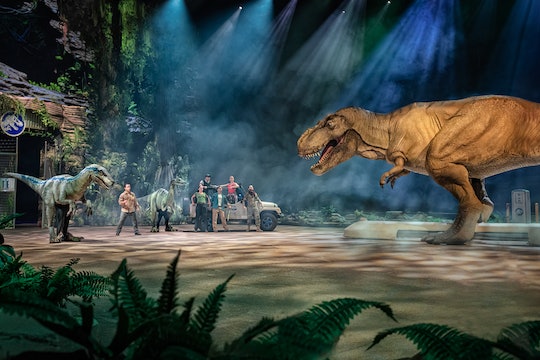 Have you ever wondered what it would be like to get up close and personal with a dinosaur? Well, thanks to Jurassic World Live Tour, you no longer have to settle for simply looking at dinosaur bones in a museum. The touring stage show brings you face-to-face with life-sized dinosaurs — all animatronic, of course. And depending on where you live, you may not have to wait long for your own encounter. Dates for Jurassic World Live Tour show the production is headed for cities across the Midwest and East Coast.

With more than 20 characters, including nine life-sized, film-accurate animatronic dinosaurs, Jurassic World Live Tour brings audience members an original story. The show is reportedly set in the gap between the 2015 hit film Jurassic World and the sequel Jurassic World: Fallen Kingdom that was released in 2018. Fans of the films may remember that Jurassic World ended with the raptor Blue and the theme park's T-Rex battling a genetically modified hybrid dinosaur known as Indominus Rex. Ultimately, a cornered Indominus Rex is dragged underwater by Mosasaurus, a massive aquatic lizard.

For parents wondering if the "live-action" dinosaur show will be too frightening for children, Jurassic World Live Tour has noted that the production was "created for fans of all ages" but that "parents are best suited to determine what is age appropriate for their children."

"The show features special effects, including strobe lights and a safe theatrical fog, along with the wonder and thrills that the Jurassic World brand is known for," a FAQ on Jurassic World Live Tour's official website noted.

Currently, the nearly two hour long show (that includes a roughly 15-minute long intermission) is wowing audiences in Cleveland, Ohio until Oct. 6. From there the show will move on to Albany and then Buffalo in New York before ending the month of October in Pittsburg, Pennsylvania. Jurassic World Live Tour will then kick off November in Rosemont, Illinois, before moving on to Milwaukee, Wisconsin, and then later Detroit, Michigan. With additional dates spread across both the Midwest and the East Coast, Jurassic World Live Tour is currently scheduled to run through April 2020. What's more, additional tour dates are expected to be announced soon in states such as California, Oregon, Washington and more. Below is a full list of the scheduled tour dates thus far:

Check out to see if Jurassic World Live Tour will be coming to an arena near you (and buy tickets) via the show's website.