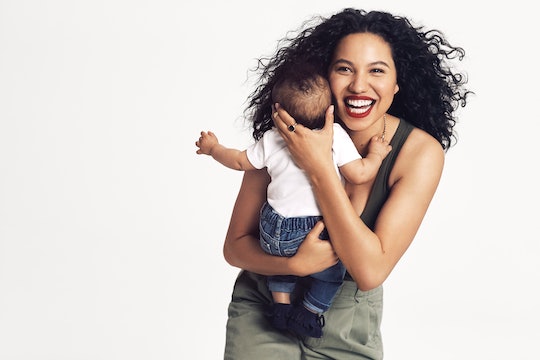 For many Americans, 2017 has been politically terrifying. Since President Trump's inauguration, large numbers of people have worried daily about being stripped of their health care, forced to leave the country they’ve called home, or losing the legal protections that have kept them safe. In situations like this, some of us naturally focus on keeping a low profile and protecting ourselves as much as possible, but others refuse to live that way. Take actress and activist Jurnee Smollett-Bell, who says she is no longer afraid of raising a black son, even in this strange and frightening moment.

This is a fairly new outlook for Smollett-Bell, who has always been vocal about her political beliefs and gone to great lengths to turn her thoughts on equality and security for all into actions. As someone who is deeply concerned about American's persistent racial inequality and very involved in the Black Lives Matter movement, Smollett-Bell once worried about raising her children in 21st century America.

"Before being a mom, I remember going on a Twitter rant during the whole George Zimmerman trial in Florida about my younger brothers and how one day I’ll be the mom of a black son," Smollett-Bell tells Romper in a phone interview. At the time Smollett-Bell recalls being scared that someday her future children, particularly any sons, would face a similar fate to 17-year-old Trayvon Martin, who was shot by Zimmerman.

I just want to raise him to walk in his purpose. To be unapologetically who he is and to embrace all that he is.

"I don’t want anyone to steal his joy," Smollett-Bell says of her son. "I just want to raise him to walk in his purpose. To be unapologetically who he is and to embrace all that he is."

As an activist Smollett-Bell is obviously not naive to what's going on in the world and the challenges her son will possibly face in the future. There's a chance security guards will keep a closer eye on him in stores, police will be quick to react if he doesn't behave perfectly in public, and, if he is ever put in that position, a judge may punish him more harshly simply because of the color of his skin. The obstacles aren't limited to racial profiling from law enforcement, either. A 2016 study from the Yale Child Study Center found that educators have a preconceived notions that black boys will misbehave more than their white counterparts and thus observe them more closely and treat them differently. From a young age, the cards are already stacked against black children. But Smollett-Bell won't let that hold her son back.

"I won’t even give into that notion, because I believe there are so many amazing people in this world," she says. "I see the movement happening all across the world, where people of all walks of life are coming together and supporting each other, and feel called to action. It inspires me. It gives me so much hope about the future. So I am not afraid at all."

It is that hope that Smollett-Bell says inspired her to participate in Gap's short film, "Mama Said." In the film, Smollett-Bell and fellow influential mothers Liv Tyler, Coco Rocha, Candice Swanepoel, and Cass and Ali Bird celebrate motherhood by spending time with their children and sharing what it means to be a mom. Although the film is an advertisement for Gap, it's also a huge call to action for Every Mother Counts, a non-profit organization dedicated to making pregnancy and childbirth safe for every mother.

"I thought it was such a beautiful project," Smollett-Bell says. For mothers, "It’s becoming increasingly difficult to get access to safe and healthy health care."

Unfortunately, the process just became even more challenging. On May 4, the House passed the GOP's health care bill, which would repeal and replace Obamacare. Though millions will be affected if the new bill, also known as Trumpcare, passes through the Senate, women are especially targeted. According to CNN, pregnancy is considered a pre-existing condition under Trumpcare, as are depression and menstrual irregularities. Additionally, The Independent reported that pregnancy will cost up to 425 percent more under Trumpcare. These new potential burden's make Every Mother Count's mission, and Smollett-Bell's message of unity, even more important.

As someone who just went through the pregnancy and childbirth experience, Smollett-Bell felt even more compelled to appear in the film. While pregnant with Hunter, the actress was filming Underground where she plays a house slave who was pregnant during the second season. Though it was mentally and physically taxing to film during her second and third trimester, doing so gave Smollett-Bell Bell a newfound inner strength.

"It was so empowering to me to be able to be on set," she says. "But there’s this notion, kind of like unspoken, that you can’t live your dreams and be a mom. You can’t have a career and be a mom. There’s still that preconceived notion, and I reject that."

When Smollett-Bell talks, there's a sense of joy in her voice that, for a second, makes you forget that the world is in a fragile state at the moment. So when you finally remember that fact, you have to wonder how she stays so damn positive. Her answer? It's just something you have to do.

That's not to say optimism is easy for her. In fact, there are days when its downright difficult. But, if you ask her, it's essential for the world to move forward.

"I do believe that we are still heading toward a more positive time, and this is all a call to action for all of us to be a walking light," she says.

There's no doubt that Smollett-Bell is that walking light — for her son, for those she works with, for those she fights for, and for so many more around the world. Hopefully, as she walks forward in work, motherhood, and life, others will absorbs some of her light and pass it on.

More Like This
Reddit Applauds Mom Of Five Who Stood Her Ground & Left Sleeping Dad Behind
There's A Good Reason Why Your Baby Is So In Love With CoComelon
Dr. Jill Biden Just Delivered Some Frank, But Powerful, Advice On Motherhood
42 Creative & Timeless Breastfeeding Photoshoot Ideas