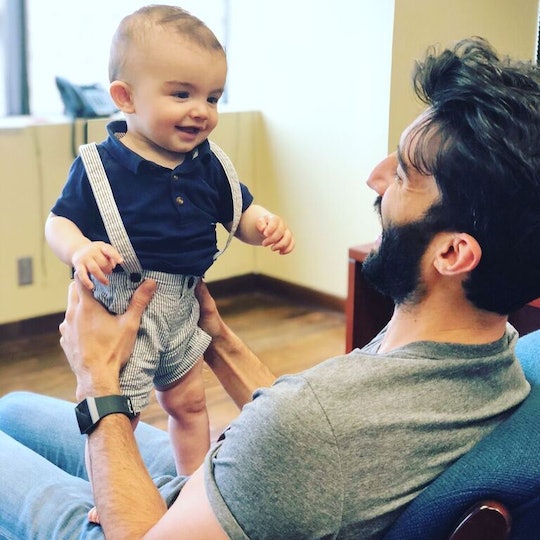 Being A Feminist Dad Means Rethinking Every Part Of My Life, & I'm OK With That

You may know him as the dashing Rafael on the hit show Jane The Virgin, but actor, director, and filmmaker Justin Baldoni is much more than what he does for a living. Set aside the Hollywood resume, and you'll find a family man at his core. Justin and his wife of five years, Emily, have two young children — their daughter Maiya turns 3 this July, and they welcomed their son Maxwell just last October. And, just like every young parent today, Justin and Emily are raising their kids in a society that is still evolving for the better.

One thing you might not know about Justin is that he’s fully dedicated to raising both his son and his daughter to be feminists, just like their parents. In honor of Fathers Day this month, read on as Justin shares how he works this goal into his everyday life as the lucky dad of two amazing kids.

I honestly didn’t know much about the definition of feminism until a few years ago. I guess that’s one of the unfortunate side effects of my privilege. But as I’ve made an effort to learn more and more, I’ve found that one of my favorite definitions of feminism comes from Cheris Kramarae, a women’s studies scholar, who says: “Feminism is the radical notion that women are human beings.” I think of this definition every time I’m asked if I consider myself to be a feminist father. In other words, do I consider my daughter to be a human being? The resounding answer is, and will always be, YES.

But just because the concept may be radical (and to some polarizing), that doesn’t mean the ways in which feminism shows up in my fathering need to be radical. Of course there will be a time when we read a Sojourner Truth speech instead of Goodnight Moon, or when family movie night consists of a documentary on a powerful woman who changed the world and not Trolls. The conversations of equality will grow and deepen as our children grow and especially as I — as a man and father — grow. For now, my daughter Maiya isn’t even 3 years old yet, and my baby son Maxwell is just 9 months old, so the ways feminism intersects with fatherhood for me are less radical, but hopefully no less powerful.

From the beginning, the message is that girls are cute and need to be concerned with style and shopping. And boys? Boys are adventurous and play in the dirt and break hearts.

Here are three of the many ways my wife Emily and I do our best to parent our children to teach equality:

Growing up in the Baha’i faith, I was raised with this quote: “Women and men are like two wings of a bird. It’s not until those wings are equal and equivalent in strength, that the bird can fly.” `Abdu’l-Bahá goes on to talk about how necessary and crucial it is for the entire advancement of the human race. So the foundation of my upbringing — seeing this quote put into action by my mom and my dad — was feminist, even if I didn’t realize at the time it could be labeled that.

Of course this didn’t mean that I was, or am, immune from societal messages and biases. I have fallen and failed in this area more times than I could ever count. But it has provided a powerful spiritual foundation for me to be able to land on when I mess up, and to stand on when I speak up. By parenting our own children with the same spiritual foundation of the Baha’i faith, we hope we can also provide that message of equality. Not because we are reading them prayers or Baha’i writings (which we do!) but because we are living out these messages in our day-to-day lives. `Abdu’l-Bahá says faith is “conscious knowledge turned into action” and I believe in their formative years, my children will learn more about equality, gender roles, and gender worth by watching how the way I interact with my wife and with them, than they ever will learn from any words I quote. So while faith is important, it’s the way that faith is put into action that is the truest teacher.

If you ever need examples of the different messages that our culture tells us about who we are supposed to be and how we are supposed to act, just go check out the children’s clothing rack at your local store. In the girls’ section you might see: “Cute as a Cupcake,” “Do All Things With Style,” “Dream, Love, Shop!” And for the boys: “Off Road Adventure,” “Future Heartbreaker,” “Dirt Never Hurt,” “Mr. Steal Your Girl.” I have seen all of these, and different versions of all of these messages, both in the magazines we men grow up reading, and in toddler sizes at the local mall. So from the beginning, the message is that girls are cute and need to be concerned with style and shopping. And boys? Boys are adventurous and play in the dirt and break hearts.

But what about the girl who loves adventuring in dirt, or the boy who likes expressing himself through fashion? I know we have come a long way in terms of clothing choices for children and some big name places are becoming more inclusive in their messaging — which is amazing! But we still have a long way to go.

As for Maxwell, it didn’t take long for me to start calling him “buddy” after he was born. I still call him my “little bud” here and there. And while that’s okay, I also want him to hear me affirm his kind heart, and validate his sweetness, emotions and tears. I want to be able to call him “sweetheart” as effortlessly as I call Maiya that.

With our children, especially our daughter Maiya since she’s old enough to choose her own clothes, we do our best to not limit their choices. We don’t dress our son Maxwell in blue every day, and trust me — that kid can rock a pink shirt with the best of them. Maiya loves to pick out her own clothes and in doing so she’s taught me an important lesson on feminism. Feminism isn’t anti everything that has been traditionally or stereotypically feminine. Feminism is anti the message that says that all women and girls HAVE to be, or HAVE to like, what is traditionally or stereotypically labeled as feminine. Guess what Maiya loves? Tutus. Pink tutus. Lots of them.

Emily and I have both caught ourselves at times wanting to put her in something less “girly.” Not long ago we tried and tried to get her to rock a pair of faded blue, baggy overalls with a cool t-shirt and some Converses, but she wasn’t having it. We couldn’t believe how mad she got when she looked into the mirror — we were just trying to be good parents, and in doing so we realized we were putting our wants for her style above hers. That in and of itself goes against the core of what we want her to know: that who she is does not need to be created or inspired by anyone else, but simply who she chooses to be.

In addition to being aware of the messages that our culture is telling us, and our children, it’s equally important that I am aware of the messages that I am telling our children. It wasn’t long after Maiya was born that Emily and I noticed that we were showering her in “sweetheart” and “you’re so beautiful” comments. As a culture, we have been conditioned to compliment children, especially girls, on their appearance. And while it is okay for Maiya to know that she is beautiful, and does have a kind heart, it’s more important that she knows that she is more than her appearance. It’s important that I compliment her mind and heart just as much, if not more, than I compliment her physical appearance. With that said, I do think we all need to be compassionate and patient with ourselves in this area. Let’s remember there is nothing wrong with letting our children know they are beautiful. That impulse is okay — we just need to make sure we have balance.

As for Maxwell, it didn’t take long for me to start calling him “buddy” after he was born. I still call him my “little bud” here and there. And while that’s okay, I also want him to hear me affirm his kind heart, and validate his sweetness, emotions and tears. I want to be able to call him “sweetheart” as effortlessly as I call Maiya that. The good news is I’m getting there and regardless of what I or anyone else calls him, he will always be my sweet boy.

I want my children to know that their emotions are welcome and being in tune with their feelings is a sign of strength. To know that while the world will tell them to focus on the strength of their bodies, that their minds are stronger. That there is room in our home, and in our world, for ALL of them; all of us. So I try — I slip up, but I keep trying, to make sure that my actions and words affirm all of the goodness that their mind, bodies, and souls encompass. I want my children to know that they are human; they are capable and kind, lovable and loved. And that everyone else is too.