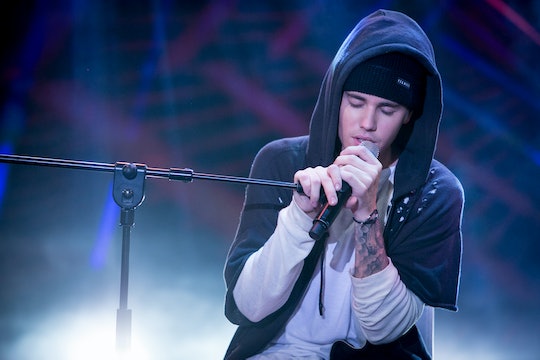 Justin Bieber & One Direction Both Released New Albums Friday, & They Might Just Make A Fan Out Of You

Confession time: When I downloaded Justin Bieber’s new album Purpose, and One Direction’s new album Made In The A.M. for the purposes of writing this article, I was pretty certain that I wouldn’t really like either of them. I mean, I’m almost 30, I’m a mom, and even though the Backstreet Boys and Spice Girls are technically cool again in a 90s nostalgia kind of way, it’s been a lonnnnng time since my pop music fangirl days. The most I knew about One Direction before this was that Zayn left abruptly and Taylor Swift dated Harry Styles and then wrote a bunch of songs about it. And I knew even less about Justin Bieber, except that he got arrested for something and then peed in a bucket one time. (Oh, and he’s Canadian, like me! What up, Stratford, Ontario!)

So needless to say, I was pretty surprised when I actually listened to the One Direction album and really liked it. And I was even more surprised when I listen to the Justin Bieber album and liked that even more. (What is going on? who am I?) I didn’t think it was going to happen, but I guess that just goes to show that you shouldn’t judge a book by it’s... uh, album cover?

Now that I’ve become well acquainted with both releases, this is what you should probably know about them about them in case you haven’t yet done yourself the favor of downloading them on iTunes. (Which you totally should do by the way.) (Yes I just said that.)

Made In The A.M. Is Basically Pop Music Perfection

Is it even possible to be a millennial and not have even at least secretly loved 90s/early 2000s pop? It was prime boy band/pop princess catchy EVERYTHING, and it’ll probably always hold a special place in all our hearts. Well, the good news is that Made In The A.M. is like the more mature (yet still just as catchy and enjoyable) 2015 version of everything we loved (and let’s be honest, still kind of love) back then.

The first track, “Hey Angel”, is totally upbeat and fun, and I would absolutely turn that up when I’m in the car and sing along until my kids complain. “What A Feeling," “End of the Day,” and “History” also have that same catchy vibe, and am I the only one who thinks “Drag Me Down” could have totally been a BSB song back in the day? Plus, “Perfect” kind of reminds me of Taylor Swift’s 1989, and you know, what is there not to love about that?

The only Justin Bieber song I was aware of before I heard Purpose was “Baby." And I hated “Baby.” But this album is full of songs that are so much better than that. And, really, I’d even heard a couple of them on the radio already and liked them, not even realizing they were Bieber songs. Like “What Do You Mean?” — totally great. "Sorry?" Fab. And I just learned that Ed Sheeran co-wrote “Love Yourself”, which makes SO MUCH SENSE because it is fantastic. In fact, a lot of tracks on Purpose sound so mature and polished, that it’s really easy to forget that this is the same guy who’s done all sorts of immature stuff in the tabloids.

They Both Have Some Stand-Out Tracks

This is already a given I think, since Justin Bieber has already released three singles (“What Do You Mean?”, “Sorry”, and “I’ll Show You”) ahead of the album release, and they’ve all done pretty well.

One Direction has similarly already released “Drag Me Down”, and “Infinity”, but some of the less assuming tracks are also surprisingly awesome — like "Walking In The Wind”, “History”, or the deliciously simple, Lennon and McCartney-esque “I Want To Write You A Song."

Justin Bieber has admitted that Purpose is a very personal album, in which he focused on expressing himself through his songs. And the theme of staying vulnerable and owning up to some of the things he isn’t so proud of runs through almost every track. In “I’ll Show You” he says “his life is a movie, and everyone’s watching”, and in “Life Is Worth Living” he sings “they try to crucify me, I ain’t perfect, won’t deny."

While Bieber probably has to try a little harder to clean up his act in public first before anyone feels that bad for him, he at least deserves credit for opening up about it.

And One Direction Will Probably Make You Swoon, Even If They’re Young Enough To Make It Feel Kind Of Creepy

Google tells me that One Direction range in age from 19 to 21 — which basically means they are children and thinking they’re cute is weird — but you gotta give them credit, they’re pretty great at heartfelt lyrics. “If I Could Fly” is a straight-up ballad-y love song that will surely make their adoring fans cry, and “Love You Goodbye” is a sweet breakup song. But “Olivia” (another Beatles-esque tune) will still seem adorable, even if you’re not into boy band love songs. (Not to mention, it’ll probably leave a lot of Directioners wishing their name was Olivia.)

I can’t say that I ever expected to write such a glowing review of two albums I was pretty confident I wasn’t going to like, but I gotta hand it to both One Direction and Justin Bieber (especially Justin Bieber) because I was pleasantly surprised by how much I liked them. Well played, boys.