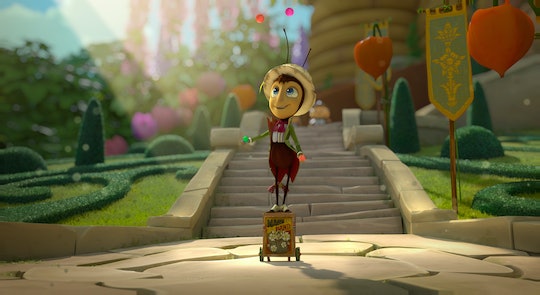 There are few things in this world that bring more pure joy than a really adorable children's movie — especially if it's one that you can enjoy as well as your kids. So I'm super excited about the new movie Tall Tales from the Magical Garden of Antoon Krings, starring the voice talents of Kate Mara and Justin Long. From the looks of this Tall Tales exclusive clip alone, this is a movie neither you nor your little munchkins are going to want to miss. Give me animated dancing bugs any day and you better believe that I will be watching that. Real bugs, no. Cartoon bugs, abso-freakin-lutely.

According to the official synopsis, Tall Tales is about a kind-hearted traveling performer and cricket. One day he lands in the village of Funny Little Bugs just as disaster strikes. The Queen Bee named Margeurite is kidnapped by her jealous evil cousin Wendy. And what's worse — Wendy manages to frame Apollo for the crime, causing panic within the hive. How will Apollo get out of this one? Will Margeurite be saved? Will Wendy be stopped? It's a kids movie so my money is on yes. But it still sounds like a fun premise — aided by the star power and talents of Mara and Long. The exclusive clip seen below is from the start of the movie, before Apollo realizes the mishaps about to befall him.

The clip opens with Apollo setting up in the town square, about to perform his act. "Here he is! Apollo the Wonder Cricket!" he announces. But it doesn't look like the townspeople are all that impressed. And to be honest his hat does look a little on the bedraggled side. But hey, it's hard for a cricket to stay tidy on the road all the time, you know? Apollo commences his act, including a pretty impressive juggling-slash-acrobatics routine. But it's not enough to keep the villagers all that entertained.

Sadly for Apollo, they yell at him to take his act somewhere else. Thrown off — poor Apollo trips, falls, and sets off a slapstick chain reaction that causes pretty much everything in sight to fall down and fall apart. Apollo asks the villagers to forgive him, but that's where the sneak peek ends. I have a feeling that Apollo is going to win the people over in the end — but how?

If the trailer is anything to go by, at least two people were interested in the show — and that includes the Queen and the evil Wendy. Somehow, I don't think that's going to make life any easier for Apollo.

It looks like the movie was originally released in France under the name Drôles de petites bêtes, though it has now been remade with American voices. I bet your kids are going to watch this one again and again — and you might not even mind so much.

Tall Tales from the Magical Garden of Antoon Krings is available exclusively now on DIRECTV and will open in select theaters Jan. 11.