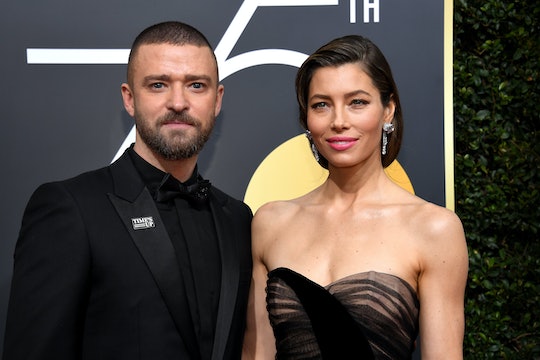 Amid public scandal spurred by the release of photos of the actor with his Palmer co-star, Alisha Wainwright, Justin Timberlake publicly apologized to Jessica Biel, his wife of seven years. Timberlake issued his statement Wednesday via Instagram, in which he expressed "regret" for his actions.

Before I get to the public apology, let's rehash: On Nov. 23, The Sun released snaps and video of Timberlake and Wainwright hanging out a bar in New Orleans, where they're currently shooting the movie. No biggie, right? Except the footage showed Timberlake seemingly holding hands with Wainwright, and she was supposedly spotted touching his knee at times, according to The Cut.

"The video may look a way, but literally it was nothing. It was some friends, members of the team, crew and people like that," a source told People at the time regarding speculation about potential inappropriateness. "They all know each other and were hanging. Like come on, they’re on an open balcony in New Orleans and he’s famous. It was nothing.”

Timberlake and Wainwright's reps did not immediately respond to Romper's requests for comment regarding the The Sun's video and photos.

After some weeks of silence, Timberlake finally released a statement addressing his "strong lapse in judgment."

In the note, which has received over a million likes as of Thursday, Timberlake penned: "I stay away from gossip as much as I can, but for my family I feel that it is important to address recent rumors that are hurting the people I love."

He continued, "A few weeks ago I displayed a strong lapse in judgement — but let me be clear — nothing happened between me and my costar. I drank way too much that night and I regret my behavior. I should have known better."

Timberlake then turned the conversation to address his wife and 4-year-old son, Silas, writing, "This is not the example I want to set for my son. I apologize to my amazing wife and family for putting them through such an embarrassing situation, and I am focused on being the best husband and father I can be. This was not that."

The actor concluded his message by noting how he's "excited" to continue working on Palmer.

At the end of the day, this is between Timberlake and Biel. So whatever next steps they decide to take in their marriage, that's up to them.