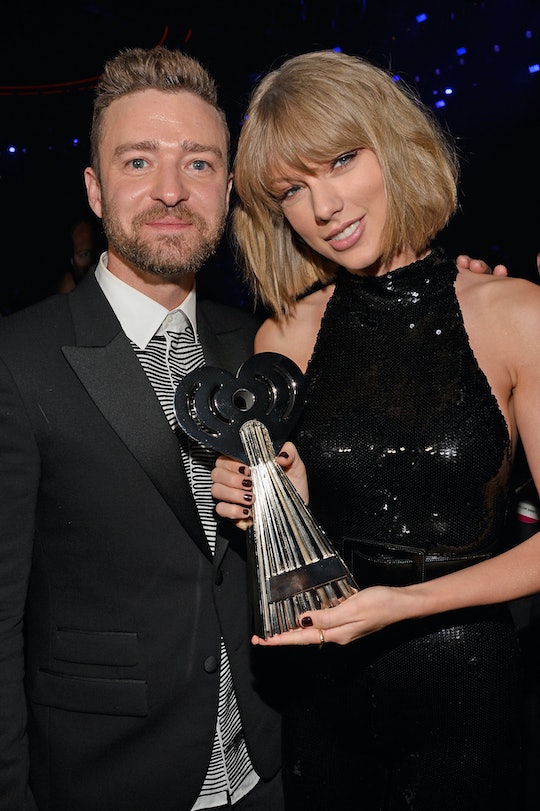 During the 2016 iHeartRadio awards on Sunday night, our collective hearts melted into a bliss of pop-culture perfection as Justin Timberlake presented Taylor Swift with the Best Tour award. While Timberlake's introduction speech was heartfelt, touching, and nothing short of inspired, it was Justin Timberlake telling Taylor Swift to text him after the award was presented that proved that, yes, there are some things better than winning an exclusive award on stage, in front of millions.

Sure, Taylor might have been able to snag some unbelievable cameos during her 1989 World Tour — arguably the main reason why her unbelievable performances landed her the Best Tour award — and sure, her acceptance speech was nothing short of perfect; but honestly, does that really compare to having JT's personal phone number in your iPhone's contacts? Hell. No. And if I would have to guess (because let's be real, I will never know), I'd still have to say: helllll no. Awards come and go, but Justin Timberlake's cell phone number and an invitation to text it last forever.

There are some career highlights you've worked your entire life for — like winning eight Academy of Country Music Awards, four American Country Awards, 22 Billboard Music Awards, and seven Grammy Awards — and then there are some that just manifest out of thin air; the kind that you can't put in a display case but you can certainly put in your contacts list. Tonight, Swift knows what that is like.

Here's the moment that Justin told Taylor to text her, because hello, jealousy.

The iconic, memorable moment wasn't lost on all of Twitter, as viewers were quick to express their excitement, awe, and understandable jealousy in 140 characters or less. Here are just a few of the best Twitter reactions:

And, look, just being totally honest here: I can't blame any of them for feeling the way they feel, because right now all I want is JT to shout me out and throw me his digits. (For what it's worth, I know I'm not the only one.) Winning is cool and all of that, and sure, it's really important and blah, blah, blah, but mark my words: There is nothing more important — nothing as important — as walking away from a Sunday night with Justin Timberlake's cell phone number in your pocket.

The only real question left to ask is: Does this mean Timberlake is officially part of Taylor Swift's squad?! Because my heart literally cannot take more of this.