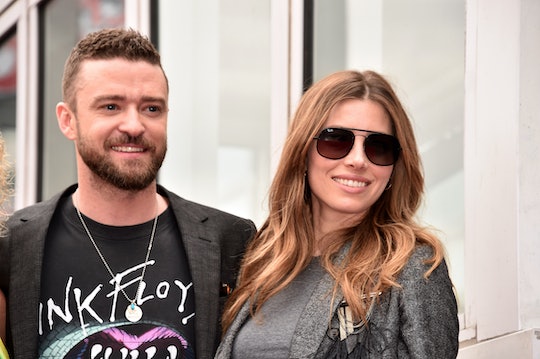 Justin Timberlake has come a far way from his days as a boy band member in NSYNC. The mega pop star is a father of one to his son, Silas, with wife, Jessica Biel, and it's changed him for the better in all of the right ways. It shouldn't really come as a surprise to anyone that Justin Timberlake's new comments about his son, Silas, are pretty perfect — they highlight the positive influence that becoming a dad has had on his life.

Earlier this week, Timberlake accepted an award at the 50th annual Songwriters Hall of Fame, according to E! News — and that award was rightfully earned. Let's be real, Timberlake needs all the awards he can get for co-writing and introducing the world to the song "SexyBack". But this award wasn't just about Timberlake and his career — during the speech, he spoke highly his wife and his son, addressing them in the middle of his speech.

Timberlake told attendees that Biel gave him "the greatest gift of love", so of course, he had to talk about Silas, too. "Our son is 4 now, and he's dope, too!," Timberlake said, according to E! News. "I've written so many songs because of that that I'm so proud of and I just...I'm extremely humbled. I hope that I can just represent this award for all of you."

Isn't that just the sweetest thing, ever? It's hard to believe that Timberlake has been a father for four years now, and he's been honest about how ever year serves as a chance for him to learn more and grow as a father. In 2017, Timberlake told The Hollywood Reporter that fatherhood "broke" him down, according to Babble.

But, it had to break him to build him into the musician he is today. In 2018, Timberlake released his album, Man of the Woods, which was largely inspired by Silas, according to People. So, this makes sense why he would say in his speech that he has written "so many songs" about his son. In an early 2018 interview with Zane Lowe, Timberlake said he named Silas after his grandfather, according to People. But when he Googled the name, he found out it meant "man of the woods," which Timberlake found to be the perfect album title.

"'Man of the Woods,' the title track, was the first song we wrote for this album and the whole thing just took flight from there," Timberlake said, according to People.

Silas' influence on the album is very apparent, since he also appears on the final song of the album, where he tells Timberlake "I love you daddy." Oh my lord! Keep doing what you're doing, Silas.

Silas was also responsible for Timberlake creating the mega-hit from Trolls, "Can't Stop The Feeling." Timberlake told The Hollywood Reporter in 2017 that the song was written as a gift to Biel and Silas, therefore making it a gift to the rest of the world (what kid wasn't obsessed with the song when it came out?). "I'd never had written it if it weren't for him," he said.

Since Silas has inspired so many good things in Timberlake's career, its safe to say that things will only get more "dope" from here.