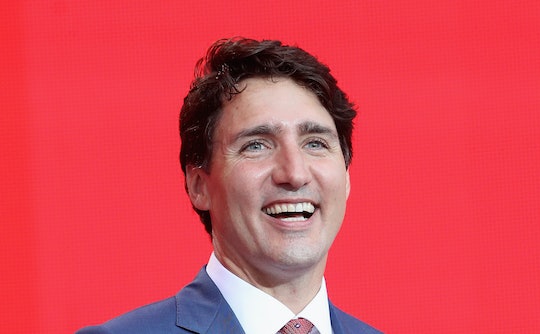 Since the dawn of time, politicians have been holding and kissing babies at public events. Joyously doing so can humanize those candidates or elected officials and make for great PR. Over the weekend, Canada's leader experienced a delightful twist on the ole pol-kisses-baby routine: Justin Trudeau met a baby named Justin-Trudeau, and the whole situation will honestly make your day. That's because it's not coincidence that the prime minister of Canada shares a name with a tiny 2-month-old who lives in the country: Baby-Justin-Trudeau's parents specifically chose that name for their newborn as a tribute and a thank you to the grown-up Trudeau himself.

The baby's parents are Afraa Hajj Hammoud and Mohammed Belal, two of the approximately 40,000 Syrian refugees who resettled in Canada between the time that Trudeau took over as prime minister and January of this year, according to BBC News. They arrived with their two older children in February, and chose to name their youngest Justin-Trudeau Adam Bilal, born in Canada this May, to honor Trudeau and his welcoming posture toward refugees forced from their homes by civil war and other humanitarian crises.

And the two finally met face-to-face at the Calgary Stampede breakfast Saturday. Even though Justin-Trudeau the younger appears to have snoozed through the meetup, it appears to have been a smashing success.

It was the baby's father who first had the idea to name the boy after the prime minister whose policies had so welcomed the family and others like them to Canada. Hammoud explained the reasoning behind the decision to CBC when he was born in May:

My husband says "How about if we name the boy Justin-Trudeau, like him?" I was a little bit shocked ... when he says that, I smile a little bit, a small smile, then I says, 'Yes, there is no problem, it will be like a small thank you for Justin Trudeau."

Trudeau had previously personally welcomed other refugees to the country when they arrived at the airport. But this was the first time that he met the family of baby Justin-Trudeau, who has a 4-year-old sister named Naya and a 3-year-old brother named Nael.

Trudeau's commitment to resettling refugees starkly contrasts that of the United States' federal government, which has spent much of 2017 fighting to implement a travel ban against travelers from several Muslim-majority countries, including Syria. The image of Justin Trudeau with Justin-Trudeau in his arms, though, shows the beauty of treating refugees with dignity and compassion.