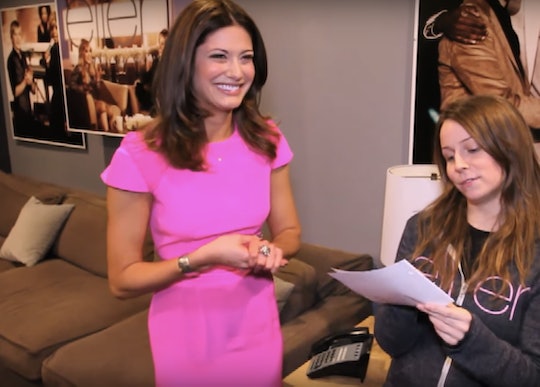 Kacie Boguskie Gaston Is Pregnant With Baby No. 2!

Bachelor fans recently had yet another reason to celebrate when Kacie Boguskie Gaston announced she was pregnant with baby number two, a daughter. The Bachelor alum revealed the baby's gender on Monday in a sweet Instagram video of husband Rusty Gaston swinging a metal baseball bat and breaking a ball filled with bright pink dust, to the delight of family and friends. "We're having a..........." Gaston captioned the video. "We're so excited to share our gender reveal with you!"

Over on Twitter, Gaston captioned the video, "And we're having a... _ or _???" using the boy and girl emoji faces. Immediately, fans of the former contestant, who describes herself as a "Christian, wife, mom, [and] blogger," reacted enthusiastically.

"This is such a fun idea!!! Yay a little girl! How exciting!!!!!" one Instagram commenter wrote. "Can't wait to love on that sweet girl!" a friend wrote.

On her blog, Gaston shared her own excitement over the impending family addition, who will be joining 18-month-old big brother, Ranger. "We are so excited to share with everyone that our family is growing!!!! It’s been hard to keep such an exciting secret for so long. Thankfully now I can talk about it and not let it accidentally slip, oh yeah, and take naps without hiding them," she wrote.

We knew we always wanted a little brother or sister for Ranger to grow up with and we wanted them to be close in age. So baby Gaston number 2 and Ranger will be 23 1/2 months apart. My due date is August 21, 2017 and Ranger was born September 8, 2015. So we will be in the 2 under 2 club for a few weeks. It sounds a little crazy, but I love the idea of these two growing up close together and while we’re already in diapers, we may as well keep buying them!!

There is so much to be thankful for as your family grows, but there’s also so many unanswered questions, just like when you’re expecting your first child. We are now wondering what will life be like with a toddler running around and a newborn at home? There will be very little “nap when the baby naps” this time around. But, I think the biggest question in both [mine and Rusty's] minds is “how will Ranger react to not being the only one who gets our attention anymore”? This is one that we will have no control over. We are trying to expose him to as many babies as we can and soon enough he will have a baby to carry around himself!

Gaston initially announced news of baby number two back on March 6, but didn't reveal the baby's gender at that time, choosing only to write, in the caption of an adorable family Instagram photo, "We've been keeping a little secret ❤. Baby number 2 will be joining our family in August!" This time around, the reveal was met with equal excitement (maybe it was all that pink dust that got people buzzing on social media?).

August may feel like a long time from now, but the weeks will likely fly by with everything Gaston and husband Rusty have to do to prepare for their daughter's arrival — including decorating the nursery and buying plenty of adorable newborn onesies. Congrats to the happy family!