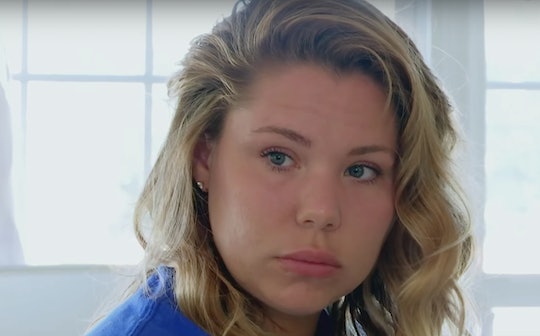 There's no shortage of haters for the cast of the Teen Mom franchise, but some of the moms appear to be more well-liked than the others. With their parenting and lifestyle choices on display for the world to see, it is perhaps not all that surprising that those watching them have opinions — and feel entitled to share them with these very real people. Those making cruel and judgmental comments may feel invisible on the internet, but these hurtful words do reach these reality stars. In fact, Kailyn Lowry thinks she's the "most bullied" teen mom because of it.

Lowry recently opened up to Us Weekly about her experience as a member of the Teen Mom cast and explained that she feels as though she is the most bullied mom. "I think some of it has to do with being outspoken," she told the publication. "Some of it has to do with being misunderstood and a lot of it is the judgment of the fact that all my children have different fathers." She added, "People comment on my weight and body and my kids’ fathers the most."

Lowry first appeared on 16 and Pregnant in 2010 when she was expecting her first son — Isaac, who's now 8 years old — with ex-boyfriend Jo Rivera. Since then, she has become a mother of three. She has a 4-year-old son named Lincoln, with ex-husband Javi Marroquin. She also shares a 5-month-old baby boy named Lux with her close friend Chris Lopez.

While she tries to stay strong against her critics, Lowry admitted to Us Weekly that being bullied does take a toll on her morale at times. “It makes me second-guess every move I make, diminishes any confidence I may or may not have left and causes me to stay guarded at all times," she told the magazine.

Constant criticism is bound to take a toll on anyone. Michelle Noehren — creator of the CT Working Moms blog and a mom of a toddler — spoke to TODAY about the social pressures on moms to look a certain way:

We live in a culture of judgment, and a culture that really expects women to be perfect and have perfect bodies no matter what else you have going on in your life.

Remaining body positive after undergoing the extreme physical changes that come with motherhood can be difficult enough on its own, but that's not the only area where Lowry's bullies strike. As she stated, people also come after her for having children with multiple men and speaking her mind.

And it's not just strangers who come after Lowry. Debra Danielsen, mom to fellow Teen Moms OG star Farrah Abrams tweeted at Lowry back in November and said, "I can't keep up with all of the baby daddys [sic] and girl friends! When does [Kailyn] find time for the children? Very confusing." Lowry fired back at Danielsen and said, "Debra, don’t do that. You don’t know me. Call me whatever, but don’t ever question me when it comes to my children."

Neither the fathers of Lowry's children nor her personality are likely to change any time soon — nor should they — and the inevitability of her bullying for them gets her down sometimes, telling Us Weekly:

I don’t think there is anything I can do to help this. It’s not going to go away. I think it’s getting progressively worse. … I’m probably the most hated mom on the franchise.

Unfortunately, her experience is all too common. Moms are commonly the subject of shaming, and more often than not the bullies are other moms. Heather Quinlan, a psychotherapist in Connecticut, told Marie Claire that she has many patients who deal with the mean mom issue. "Whether it's a mom being snarky, exclusionary, judgmental, manipulative or outright cruel, it can cause major distress in the women on the receiving end of the behavior, and creates hugely unhealthy relationships," she explained to Marie Claire in 2017.

Whether you're famous or not, mom-shaming never feels good. Thankfully, Lowry doesn't seem to be letting her critics get the best of her. As disheartening as the mean comments may be, she's focusing on her family — and that's the best thing that she can do.