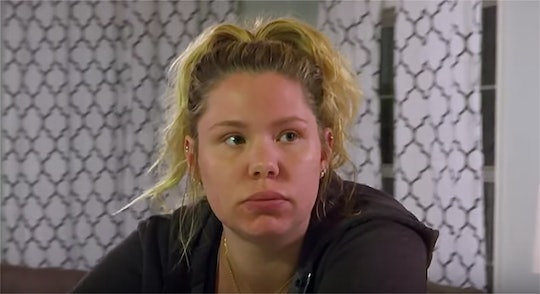 Out of all of the current Teen Mom 2 stars, Kailyn Lowry arguably receives the most backlash. There's a good chance the criticism has something to do with Lowry's need to keep it real at all times, and her refusal to conform to traditional parenting norms. But just when you thought the reality star's life couldn't get any more honest, Kailyn Lowry admitted that she almost gave up her son, Lincoln, according to an excerpt from her new book obtained by Radar Online. And if you've ever felt pressure that comes with having children, you'll probably understand Lowry's logic regarding this tough time in her life.

Lowry, a mom to three boys (Isaac, 8, Lincoln, 4, and Lux, 1) has always had her hands full. Following Isaac's birth in January 2010, the MTV celebrity struggled to make it work with her then boyfriend, Jo Rivera, and she was later kicked out of the Rivera's family home once she started a new relationship. Without a place to live, Lowry ended up in a homeless shelter, a difficult situation she dealt with until her cousin directed her to a program that helps find housing for young moms.

Although Lowry's future brightened after she settled into the apartment, her personal life continued to falter. Just five years after Lowry tied the knot with Javi Marroquin, they divorced. The exes then had to learn how to effectively co-parent their son, Lincoln, an effort that was complicated when Lowry and her boyfriend, Chris Lopez, conceived a child together.

Considering Lowry's life has been full of ups and downs, it's really no surprise she suffered moments of doubt. And one of those moments occurred shortly she gave birth to Lincoln in November 2013.

“I never thought that I could love another person as much as I loved Isaac,” Kailyn revealed in her new book, Letters of Love, according to Radar Online. “I didn’t believe that I had the capacity to love the same way. I was so afraid that I couldn’t be the mother to Linc that I was to Isaac.”

Makes sense, right? It's really common for parents to doubt whether they can make more room in their heart for another child, or whether they'll be able to do just as a great of a job parenting their additional children.

Eventually, Lowry's thoughts became so overwhelming that she told Marroquin that Lincoln was better off with him.

"I even told Javi that maybe he should just take the new baby, and I would go off with Isaac," Lowry shared, according to The Inquisitr. "I could not believe that they were the thoughts I was having, but they were real."

Of course, mom-shamers came out in full force once Lowry's admission came to light.

"WTFFFF why would you put this in a book knowing he's going to read it one day?" one fan on Twitter asked.

"That is so f***ed up," someone else chimed in. "I understand when you’re pregnant you get multiple emotions, BUT thinking to give up your child over not loving it?!? She doesn’t deserve him."

Others, however, came to Lowry's defense.

A fan pointed out:

I think Lincoln will be intelligent enough to see the distinction, having known her deep love for him his entire life. Sometimes a baby needs to be born & not a more abstract unknown. This is so common among moms having their 2nd & upon his birth she knew her fear unnecessary.

"I don’t see anything wrong with this!" someone else chimed in. "She’s being honest not saying she doesn’t love her son."

I agree that Lowry's fear is common and that it's nothing to be ashamed about, a sentiment that's backed by experts. Parenting specialist and mother, Rachel A. Cedar, M.S.W., explained to Parents:

It's a myth that because you have had one baby you should be prepared and unafraid during your second pregnancy. The truth is that second pregnancies and second children can be just as nerve-racking as the first.

Translation: Lowry is not alone here, and it's great that she spoke out about this common issue. The more transparent parents are, the more understanding and acceptance there will be.