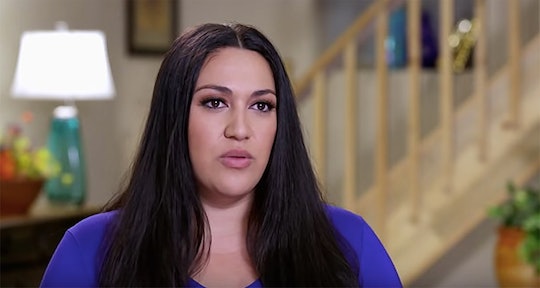 The 90 Day Fiancé family is about to get a bit bigger because Kalani is expecting her second child with Asuelu. Kalani dropped the exciting news on Sunday's episode, admitting that she isn't ready to bring another life into this world. As for Twitter's reaction? Fans didn't see this development coming.

Before the big pregnancy announcement (guys, I'm still reeling over this), Kalani was trying to figure out next steps with Asuelu. The mom-of-one wasn't sure about whether she wanted to marry Samoa-born Asuelu, while her family continued to express their reservations about their relationship.

Although there are a lot of issues at play here, Kalani has been especially worried about Asuelu's maturity and parenting abilities. It all came to a head after Asuelu removed their crying infant, Oliver, out of his carseat during a road trip from California to Utah. Asuelu thought the gesture would calm Oliver down, but Kalani was understandably freaked out.

Given Kalani's hesitations about Asuelu as a parent, it's a bit ironic they're expecting another baby together. The pregnancy wasn't planned, and Kalani was tearful as she vented about the situation to TLC's cameras.

Kalani was also nervous to tell her family about the pregnancy, an understandable fear based on Asuelu's recent interactions with her sister, Kolini.

Oh, and I did I mention Kalani's protective dad? It's no secret he'll likely have *thoughts* about the news. Yikes.

"Kalani wanted to tell her mom about her pregnancy at the park because her dad was at the house and she didn't want him to overhear the conversation. #90DayFiance," TLC's official Twitter account said about the awkward situation.

As one might expect, fans are a bit surprised about this second pregnancy.

"Holy firecrackers! Kalani's pregnant again? Seriously?!?!" one person wrote on Twitter. "I get the impression that she isn't financially stable enough to support herself and her child, and now she's going to have another child. Luckily, her family is both financially and emotionally supportive."

"Oh lawd, Kalani is pregnant. Fix it Jesus! #90dayfiance," someone else said.

Another person chimed in: "OMG EVERYONE!!! I DID NOT SEE THIS COMING! She is pregnant? Really Kalani?!?! #90DayFiance."

Others took Kalani to task for suggesting Asuelu got her pregnant in some sort of scheme to stay in America. *Facepalm*

Not to mention, there's some frustration about Kalani's claim that she couldn't use birth control due to breastfeeding.

"Is Kalani really going to act like she had no part in getting pregnant again?" a fan wrote. "You can for sure be on birth control while breastfeeding. I know from experience. Stop trying to blame Asuelu for everything. #90DayFiance."

"The NERVE of Kalani to say Asuelo plotted to get her pregnant for ulterior motives!" one person commented. "He's a sweet, innocent guy who loves her & all she does is blame him. #90dayfiance."

Someone else argued: "Why is it solely Asuelu's fault that Kalani is pregnant again?? Last time I checked it takes two people to make a baby #90dayfiance."

Oh boy, it's clear this pregnancy is a hot topic for fans. At the end of the day, however, it's up to Kalani and Asuelu to work things out. If they choose to keep this pregnancy, they'll have to present a united front for the sake of their new baby.