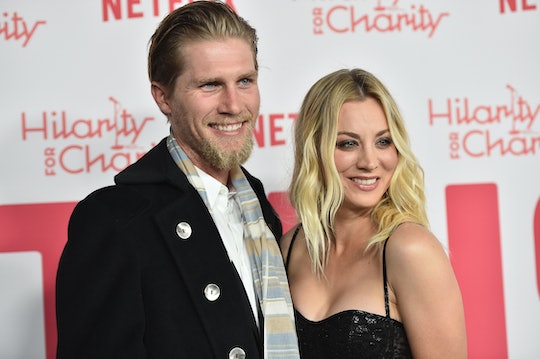 Big Bang Theory's Kaley Cuoco is loving her life. Not only is she the star of an incredibly popular sitcom, but she also got married five months ago, and she definitely seems like she's enjoying life as a newlywed with her husband, Karl Cook. But just because she recently got married, it doesn't mean she's looking to add a baby into the mix, and of course, that's none of our business whenever that may or may not happen. But, people like to speculate, so on Thursday, Cuoco responded to people asking if she's pregnant in a new photo she shared on Instagram, but she also posed a very important question about those invasive comments.

After getting married at the end of June, Cuoco and Cook have finally just now embarked on their honeymoon to Switzerland, according to Us Weekly. Since being in Switzerland, the couple has shared some super sweet photos of themselves enjoying all that the gorgeous country has to offer. But posting these photos has come with some prying eyes. On Wednesday, Cuoco posted a super pretty black and white photo of her bent over, kissing Cook on a snow covered patio. "Love in Lugano," Cuoco captioned the photo.

But some people thought Cuoco could also be referring to a possible pregnancy, especially after they possibly thought they spotted Cuoco with a "bump" in the photo (ugh...). But she immediately shut that speculation down in her Instagram Story on Thursday in the best way possible.

She reposted some users comments from her most recent Instagram post, letting them know that they were completely unnecessary. "I'm so sorry I bent over in a way to where my dress billowed in the wind and made you think this," she wrote.

And she also posed a very important question that should have everyone reconsidering the things they ask celebrities on social media: "Question: Would you walk up to me and ask this straight to my face?"

She has a point. For obvious reasons, it's pretty inappropriate to ask a woman if she's expecting, especially to her face. Although inquisitive minds would love to know the answer to the question, it's sometimes best to keep the questions at bay. When someone wants to spill the beans that they're expecting, they will do it in their own way, when they're ready.

But even after Cuoco posted that perfect message to her Instagram story, fans are still inquisitive about a possible pregnancy — and this really needs to stop.

"Why are you so defensive when people ask if you are pregnant?" one commenter asked.

"Only thing missing is an ultrasound picture," another commenter added. "Make it happen."

These kind of comments are pretty unfair, even they're directed at a celebrity who receives thousands of comments on their photos (like Cuoco). If she's pregnant, she will tell people when she is ready. And right now, she's just happy and enjoying her honeymoon — and people need to respect this.

But this isn't to say that Cuoco doesn't want kids in the future. During an interview with Entertainment Tonight in October, Cuoco revealed that kids are definitely in her future, but just not in her near future. Cuoco said:

I'm definitely — I'm not there, yet. I'm not quite there yet but I know that I will be 'cause I love kids. But I'm a worker bee right now — kind of my career is my focus and my husband. But, we love kids and we love animals so we're meant to have children.

There you have it. Right now, it's clear that Cuoco has her mind on other things, like enjoying the holidays and her delayed honeymoon with her husband. And because she is on vacation, she shouldn't have to deal with responding to ridiculous questions about a possible pregnancy.