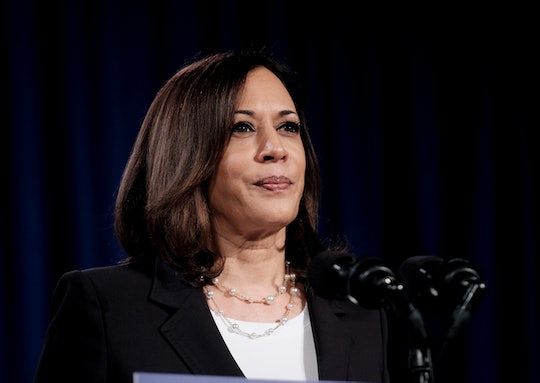 As grandchildren across the United States celebrated Grandparents Day over the weekend, the Democratic vice presidential nominee marked the national holiday with a social media post honoring her own grandparents. While it's well known that Kamala Harris' grandparents inspired her interest in public service, the California senator shared how their zeal for improving their community led her to becoming Democrat's 2020 vice presidential nominee.

"My grandparents were phenomenal," Harris tweeted Sunday. "My grandfather was a defender of the freedom of India, while my grandmother traveled across India to talk to women about accessing birth control. Their passion and commitment to improving our future led me to where I am today."

Along with being the first Black woman on a major party ticket, Harris is also the first vice presidential pick to have Indian heritage. As a first-generation American, Harris has often credited her mother and her grandparents with shaping her. In sharing her vision of America with voters during the Democratic National Convention, for example, the Associated Press reported Harris drew on the vision her mother, Shyamala Gopalan, had instilled in her of a nation "where all are welcome, no matter what we look like, where we come from, or who we love."

But Harris' mother isn't the only person she has credited with helping guide her. According to The New York Times, Harris has also said her grandfather, a diplomat named P.V. Gopalan, helped shape her early views on politics and public service.

In a speech at the 2018 Pratham NY Tri-State Gala, Harris recalled walking on the beach in Besant Nagar with her grandfather and his retired colleagues whenever she visited from the United States. "I remember the stories that they would tell and the passion with which they spoke about the importance of democracy," Harris said. "As I reflect on those moments in my life that have had the most impact on who I am today — I wasn't conscious of it at the time — but it was those walks on the beach with my grandfather in Besant Nagar that had a profound impact on who I am today."

In 2019, she reiterated the influence those walks, and her grandparents had on her career in public service in a campaign video shared to her Instagram. "They would talk about the importance of fighting for democracy and the importance of fighting for civil rights and that people would be treated equally regardless of where they were born or the circumstances of their birth," Harris said of her grandfather and his friends. "Those walks along the beach in India really planted something in my mind and created a commitment in me before I even realized it. It has led me to where I am today."