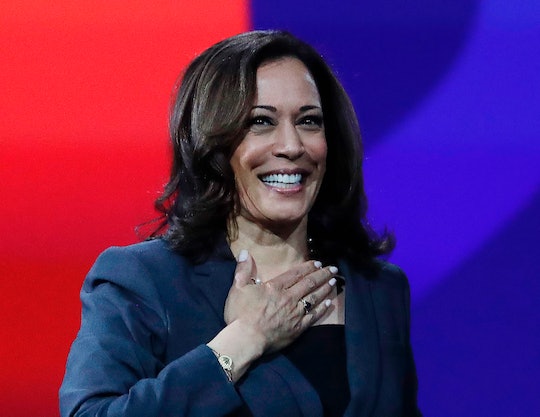 Kamala Harris Vows To Make Mental Health Care Available To All, Including Children

As the presidential election continues to heat up, 2020 Democratic candidate Sen. Kamala Harris introduced a mental health plan that aims to provide care on demand, ensuring that all Americans who need help, have access to it when and wherever they are. As part of her plan, released on Monday, the California senator has also vowed to support evidence-based screenings for childhood trauma being used to diagnose and treat mental illness as early as possible.

"When we talk about health care, we often frame it as the neck down — but we need to take care of people from the neck up," the California senator wrote in a series of tweets promoting her plan to address what she called America's mental health care crisis. "In my Administration, mental health care will be a priority."

Harris' plan includes using her Medicare for All plan to make mental health care services available "on demand" via telemedicine technology. In doing so, the senator has said people would have direct access to mental health care professionals with no deductibles or copays, thus eliminating some of the barriers that can keep people from seeking help when they need it.

In an effort to diagnose and treat mental health issues as early as possible, Harris has also committed to investing in and fighting for evidence-based mental health practices, including broad screening for childhood trauma and programs for kids thought to be at risk. In her plan, she acknowledged that trauma in early life experiences can have a profound impact on children's long-term health. Additionally, she argued that early intervention was key to giving children the tools and opportunity to reach their full potential and become resilient in the face of trauma.

"While most serious mental illnesses do not begin until a person’s late teens or early twenties, early intervention can prevent severe and disabling effects of serious emotional disturbances in children," Harris' plan read. She has proposed ensuring all children have access to a nurse and social worker through their school as well as full Medicaid benefits. "Under her plan, cost won’t bar young people from accessing treatment and mental health services as soon as they need it," her policy proposal promised.

Harris' mental health plan also included vows to double both the number of treatment beds nationwide and the amount of funding put toward researching mental health issues that impact vulnerable populations like children and veterans.