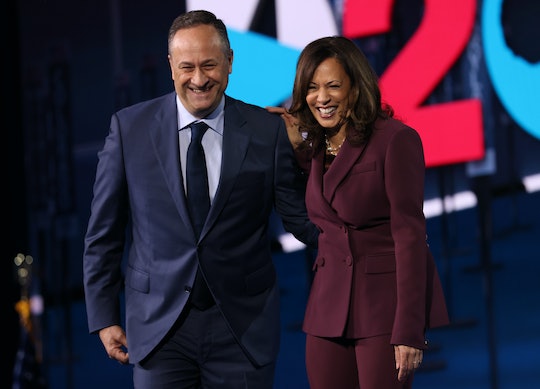 In an interview with CNN, Democratic vice presidential nominee Kamala Harris opened up why her blended family works so well. The California senator credited her friendship with husband Douglas Emhoff's ex-wife as being a key part of her close relationship with Emhoff's two children.

"Family means everything to me," Harris wrote when sharing a clip of her CNN interview on Instagram. "I've had many titles throughout my career, but Momala will always be the one that means the most to me."

Following her marriage to Emhoff in 2014, Harris became a stepmom to Emhoff's two children, Cole and Ella. But the family opts not to use terms like stepmom or step children. Instead, Harris refers to Emhoff's children as her son and daughter; they, in turn, call her 'Momala.'

"One of the keys to my relationship with Cole and Ella is their mom," Harris told CNN's Dana Bash during an interview at Howard University, the vice presidential nominee's alma mater. "We are friends. We have a very modern family."

The Democratic 2020 vice presidential nominee went on to say her blended family worked because everyone involved approached it with the attitude that there was plenty of love to go around. "It happened naturally," Harris said of the family's bond. "The thing about blended families — if everyone approaches it in the way that there's plenty of love to share, then it works."

In an essay for Elle, written during her presidential bid last year, Harris revealed she'd intentionally delayed meeting Emhoff's children when the pair were first dating. "As a child of divorce, I knew how hard it could be when your parents start to date other people," the senator wrote, adding she'd been determined not to insert herself into Cole or Ella's lives until she and Emhoff had determined their relationship was serious. "Children need consistency; I didn't want to insert myself into their lives as a temporary fixture because I didn't want to disappoint them. There's nothing worse than disappointing a child."

Ultimately, while Harris said she was already "hooked" on Emhoff, she claimed it was his children who really "reeled" her in.

But Harris also had to meet Cole and Ella's mother, Emhoff's ex-wife Kerstin. Thankfully, the pair hit it off and became friends who would attend Ella's various athletic functions together. "To know Cole and Ella is to know that their mother Kerstin is an incredible mother," Harris wrote in Elle. "Kerstin and I hit it off ourselves and are dear friends. She and I became a duo of cheerleaders in the bleachers at Ella's swim meets and basketball games, often to Ella's embarrassment."