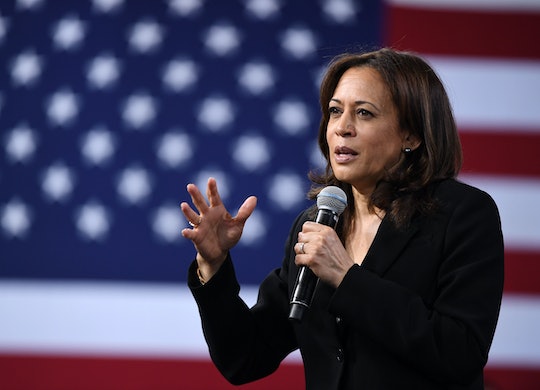 Kamala Harris Has A Comprehensive Plan For Working Mothers & Families

Women hold up half the sky, and it’s past time that lawmakers got busy giving them some help and support in doing so. And that’s the message presidential hopeful Kamala Harris has for working mothers and their families. And, what's more, it’s one she learned to advocate at her mother’s knee.

At a recent town hall in Greenville, South Carolina, Sen. Harris reminisced about her own childhood. "I was raised by an incredible mother. She was a scientist, and she had two goals in her life: to raise her daughters and then (to contribute to curing) breast cancer," Harris said.

The California senator added that her mother — Shyamala Gopalan, a breast cancer researcher and activist, according to U.S. News & World Report — would take her and her sister, Maya, who incidentally now chairs her presidential campaign, with her to the lab on "on weekends, and after work, and after school."

While Gopalan was hard at work, though, times were not always easy. "I remember our mother coming home sometimes just outraged at what she had witnessed, what she had seen, the inequities, of how women are treated in terms of their health issues, in terms of the workplace,” Harris said at the town hall. "And so, as a very young child, it was just in my environment to always be in the business of continually fighting for women’s issues, for women’s dignity."

Harris shared that her mother didn’t stand for complaining, and that’s actually why she’s thrown her hat into the ring: "She’d say, ‘Well, what are you going to do about it, Kamala?’, and so I decided to run for President of the United States." Harris officially announced her candidacy in January, according to The New York Times.

This passion and her understanding of the critically important role women play in the U.S. economy has led Harris to develop a suite of policies that would provide a dramatic boost to the quality of life for working women and their families. Here’s a look at a few of the ways Harris could change the game for those of us holding up the sky.

More Like This
How To Help Families Affected By The Devastating Earthquake In Turkey & Syria
Michigan Right-Wing Group Wants To Erase LGBTQ+ Sex Ed
Teacher Shot By 6-Year-Old Student Told School He Had A Gun, Was Told To "Wait"
Trans Youth Describe The Importance (& Joy) Of Family Support In Moving New Documentary
What Parents Are Talking About — Delivered Straight To Your Inbox