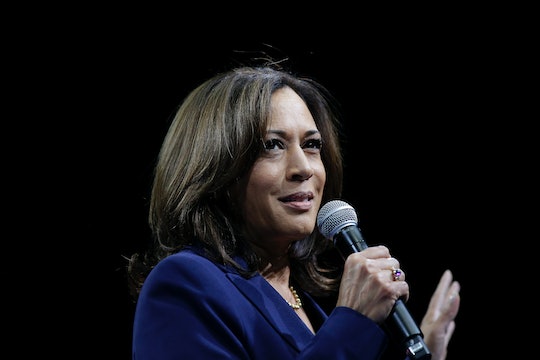 As it stands, many schools in America start early in the morning and run until 2 p.m. or 3 p.m., a time frame that typically conflicts with parents' work schedules. If you don't get out of work until 6 p.m., for instance, you must find an after-school program or childcare for your kid during those missing hours. And if you can't afford either of these two options, then you're probably forced to have your child watch themselves, which isn't ideal.

Harris has experienced these issues firsthand, stating in a press release, “My mother raised my sister and me while working demanding, long hours. So, I know firsthand that, for many working parents, juggling between school schedules and work schedule is a common cause of stress and financial hardship. But, this does not have to be the case.”

This is where Harris' bill comes in: She hopes to lengthen the school day from 8 a.m. to 6 p.m., "with no closures except for weekends, federal holidays, and emergencies." She'll rollout her plan via a pilot program that will give $5 million to 500 "elementary schools serving a high number of low-income families" over the course of five years, according to CBS Sacramento.

By year five, the Education Department will "publish a report documenting the best practices, as well as changes in parental employment, student performance, and teacher retention rates to be used to inform a future broader program," according to Mother Jones.

As for how teachers factor into all of this? Teachers and faculty "would not have to work additional hours unless they sign up for an extra shift, for which they would be compensated at the rate they get during normal school hours," according to CNBC. And to fill these extra hours, Harris proposes school administrators develop a schedule of enrichment activities, like “music, arts, athletics, writing and engineering."

The bill also accounts for teachers' professional development days, proposing schools should remain open during these instances. Instead, schools would be required to offer a full-day of "enrichment activities free of charge for students," according to a press release. And during the summer breaks, Harris hopes to "authorize an additional $1.3 billion annually for 21st Century Community Learning Centers to allow up to 1.8 million more children to access summer programming."

Of course, there are probably plenty of people who disagree with Harris' proposal. But the senator appears to have support from various stakeholders, including Catherine Brown, Senior Fellow at the Center for American Progress.

“The misalignment between school and work schedules puts working Senator Harris’ proposal would better support families in arranging child care and their work schedules, enabling more parents – largely mothers – to work, advancing educational equity and providing a needed boost to our economy," Brown said in a statement, according to a press release.

No matter where you might stand on this issue, I think many can agree working families need more support. And potentially lengthening the school day is just one idea to accomplish this goal.