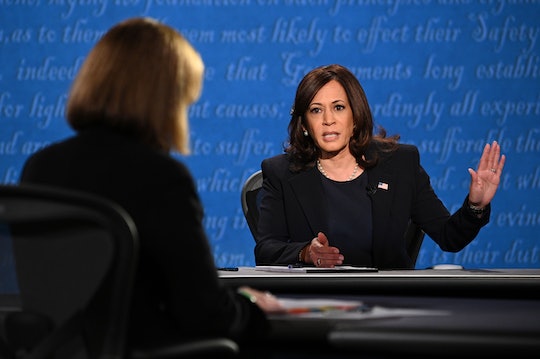 Although Wednesday's vice presidential debate between Mike Pence and Kamala Harris didn't contain anywhere near the same number of interruptions that voters saw last week in the first presidential debate, there were still a few moments where the Democratic VP nominee had to hold her ground — and reclaim her time — from Pence. Clips of Harris telling Pence, "I'm speaking" had Twitter in a frenzy, drawing applause from women all too familiar with men interrupting them.

While criticizing the Trump administration's response to the COVID-19 pandemic during Wednesday's debate, Harris brought up Pence's defense of Trump downplaying the virus so as to not raise alarm. "The vice president is the head of the task force and knew on Jan. 28 how serious this was," Harris said. "And thanks to Bob Woodward, we learned that they knew about it and then when that was exposed, the vice president said, when asked 'well why didn't you all tell anybody,' he said because the president wanted people to remain calm."

But before Harris could continue she was cut off by Pence. "Susan, I have to weigh in here," the vice president said.

Harris used the line again a bit later in the debate when Pence interrupted her for a second time. "The truth and the fact is Joe Biden has been very clear," Harris said. "He will not raise taxes on anybody who makes less than $400,000 a year—"

"Mr. Vice President, I'm speaking," Harris said. "If you don't mind letting me finish, we can then have a conversation. OK? OK."

At another point, when moderator Susan Page moved to cut Harris' speaking time, the Democratic vice presidential nominee pushed back. "He interrupted me, and I'd like to just finish, please," she said.

On Twitter, women cheered Harris for pushing back, with many noting just how relatable the moments were. "'He interrupted me, and I'd like to just finish please,' is a line every woman who has ever attended a meeting with men can relate to," TIME's Lissandra Villa tweeted.

"Kamala speaks for all of us (women)," novelist Jennifer Weiner wrote in reference to the line.

"Tattoo this on my arm," Audrey Wauchope Lieberstein joked.

While Pence doesn't have quite the same penchant for interrupting people as President Donald Trump appears to, Harris' responses at Wednesday's debate made it clear she's not the person you want to interrupt.