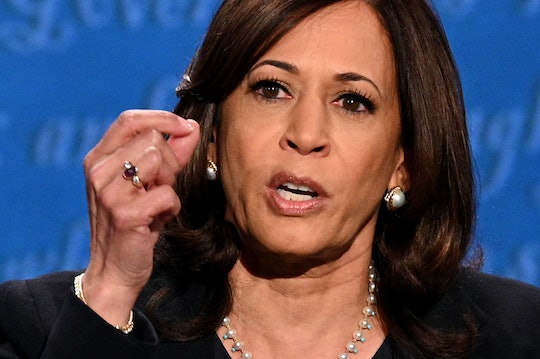 During the first and only Vice Presidential Debate on Wednesday, Sen. Kamala Harris warned Americans with pre-existing conditions that President Donald Trump is currently in a battle with the Supreme Court to repeal the Affordable Care Act (ACA), commonly known as Obamacare. "If you have a pre-existing condition — heart disease, diabetes, breast cancer — they're coming for you," the Democratic vice presidential nominee said.

Vice President Mike Pence, who repeatedly spoke of the ACA in the past tense (it currently provides health care coverage to 23 million people), referred to the program as a "disaster." Harris, who praised Biden for his role in the foundation of the ACA, also warned "If you are under the age of 26 on your parents' coverage, they're coming for you."

Trump has made no secret of his disdain for the ACA, and has made the dismantling of the program a key (unmet) goal of his administration. His latest attempt, a legal battle in the Supreme Court, is expected to be heard shortly after the election. Many experts believe that the addition of Amy Coney Barrett, Trump's current SCOTUS nominee, would give the conservative justices the vote they need to undo the ACA.

Former Vice President Joe Biden has described the efforts by the Trump administration as "cruel," "heartless," and "callous," particularly amid a global pandemic. The repeal also comes as more than 7.5 million Americans have been infected with COVID-19 which, without the protections afforded by the ACA, could be considered a pre-existing condition and thus prevent them from receiving health care moving forward. House Speaker Nancy Pelosi has echoed this sentiment. "If President Trump gets his way, 130 million Americans with pre-existing conditions will lose the ACA’s lifesaving protections and 23 million Americans will lose their health coverage entirely. There is no legal justification and no moral excuse for the Trump Administration’s disastrous efforts to take away Americans’ health care."

Harris has been a supporter of the ACA since she voted on its passage as a California Senator in 2010, and she and Biden have made access to health care a key foundation of their campaign.