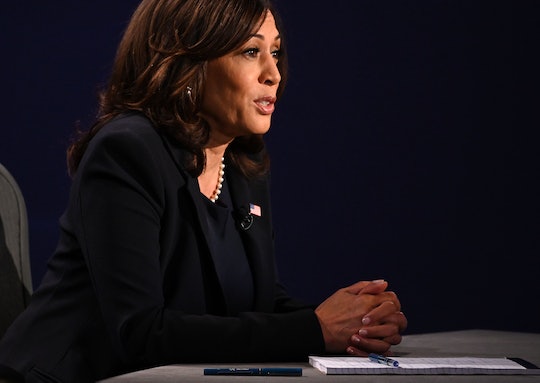 Kamala's *Mom Look* Is The Real Winner Of The Debate

During the first and only vice presidential debate between Vice President Mike Pence and Sen. Kamala Harris Wednesday night, voters were hoping for a tad more decorum and fewer interruptions after a chaotic night the week before starring Joe Biden and Donald Trump. Harris was calm, collected, respectful, and polite. She rarely interrupted and did not name call. She did not attack Pence personally. But she didn't have to. For she is Momala and, as such, in possession of the superpower all mothers posses: the power to let you know exactly what she thinks about what you just said without saying a word.

It's that skeptical expression that strikes fear into the heart of every child who says, "I don't know why the floor is so sticky." The look that lets a teenager know that Mom knows that you know exactly how that big dent got on the car. It's how you know the precise moment when your sass has gone too far this time, and now only God can help you —the cool stare that lets you know mommy loves you, so she won't kill you, but you're probably going to wish she had.

Barely a few minutes into the debate, it wasn't just moms who noticed this look, but everyone who has been on the receiving of that loving glare that can instantly make us feel like a naughty, lying kid again...

There was the hand clasp:

The look every mom has perfected:

Momala, we heard you loud and clear Wednesday night, even when you didn't say a word!