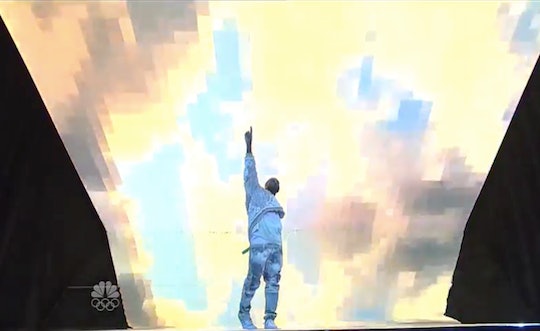 Before Kanye's performances on Saturday's show, the album had not premiered anywhere except for his Yeezy Season 3 at Madison Square Garden on Feb 11. Since then, we have been anticipating the public release of the album–on a streaming service or otherwise–and it has yet to arrive. West said that because of Yeezy Season 3, the album was not actually finished. Collaborators wanted to add tracks to what fans thought was the completed album at the show.

One such collaborator was Chance the Rapper, who Kanye called out on Twitter for wanting to fine tune the album. "It’s Chance's fault the album not out yet," he joked. "He really wanted 'Waves on that Bitch'... we in the lab now."

Other collaborators on The Life of Pablo include Frank Ocean, Ty Dolla $ign, Post Malone, and Young Thug. West's first performance on Saturday Night Live was "Highlights" with Young Thug. Young Thug was present at Yeezy Season 3, and West revealed at the show that he'd be performing with him.

According to the official Saturday Night Live Twitter account, you never know what you're going to get with a Kanye West performance. That certainly turned out to be the case. The stage was practically unrecognizable with large screens draping the walls and a crowd of people on the stage. Some of Kanye's fellow performers were easy to recognize — others, not so much. According to Complex, beyond Young Thug, Kanye was joined by Kelly Price, Young Thug, and singer/songwriter El DeBarge. A$AP Bari was also in attendance. For "Ultralight Beam," Kanye's second performance, Chance the Rapper took the stage with him.

Similarly to his first performance, "Highlights," Kanye opted to not only perform with others for "Ultralight Beam," but to bring a crowd on the stage with him.

In true Kanye West fashion, the rapper did not take performing on Saturday Night Live lightly. Instead of merely singing and rapping on the already-dressed stage, he made the platform his own. West always makes an appearance, and he did not disappoint with this one; The performance served as an experience for the viewer – both at 30 Rock and for those watching at home.