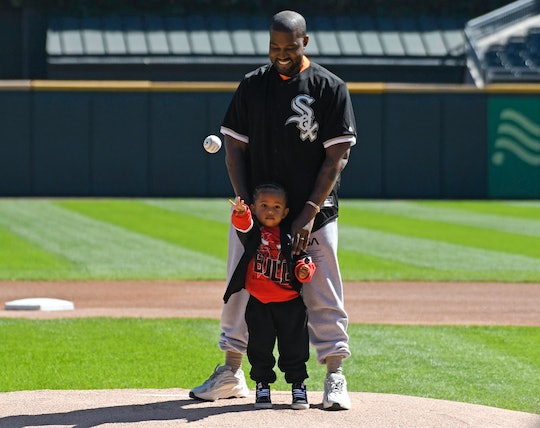 There are a lot of ways people can describe rapper Kanye West — and "doting dad of three" is one of them. West and wife, Kim Kardashian, love being parents to their three young kids: daughters North and Chicago and son Saint. And it's so refreshing to watch them be parents. Seriously, seeing Kanye West be one proud dad after 2-year-old Saint threw the first pitch at a Sox game in Chicago is as good as it gets. This man loves his kids.

West also loves his hometown of Chicago and Chicago clearly loves him back. After West stated on Tuesday that he was "moving back to Chicago" and "never leaving again," according to TMZ, he got the honor of throwing out the first pitch at a Chicago White Sox game just a few days later, according to Rolling Stone. But West didn't do this alone — he had Saint there on the pitcher's mound to help him.

In a video taken from the baseball game, West walked out to the field (to his song "Homecoming," naturally, according to Rolling Stone) with Saint (repping the Chicago Bulls on his shirt) on his shoulders, which is inarguably the best seat in the house. After removing Saint from his shoulders, Saint got to throw the baseball, first, with West getting to do the same after him.

Although West's pitch might have been a little more precise, it definitely wasn't as adorable as Saint's pitch. West seemed to agree with this — just look at his smile in the photo he posted from the baseball game to his Instagram account.

Although Kardashian reportedly isn't immediately packing her bags to move to Chicago (no matter what West stated this week), according to People — you can't deny how happy he and Saint look to be back on some home turf. This isn't the first time that West and Saint were spotted looking so overjoyed to be together this weekend. On Saturday, West tweeted that he and Saint were eating a meal at the Sugar Factory in Chicago — and documented it with a super adorable mirror picture.

But who wouldn't be happy to eat candy and french fries for dinner and go to a baseball game the next day? That is my ideal weekend, every weekend.

While West was off supporting Saint throw out his first baseball pitch ever, Kardashian was supporting their oldest daughter, 5-year-old North, at her first fashion show in Los Angeles. Now this family works hard.

North took to the catwalk for the first time ever on Saturday, according to People, to model during the L.O.L. Surprise Fashion Show, dressed as her favorite L.O.L. Surprise doll. It shouldn't come as a surprise that North killed it — taking a cue from her supermodel aunt, Kendall Jenner.

Kardashian told People that North loves L.O.L dolls, so she naturally had to be included in the fashion show.

Who knows? Since West is also a fashion designer, North could possibly have a future career in modeling her dad's designs. And if Saint really loved throwing out the first pitch, he could end up doing it competitively one day. But at the end of the day, people should just like their kids be kids and have fun.

And it definitely looks like Saint, North, and their dad had tons of fun this weekend.