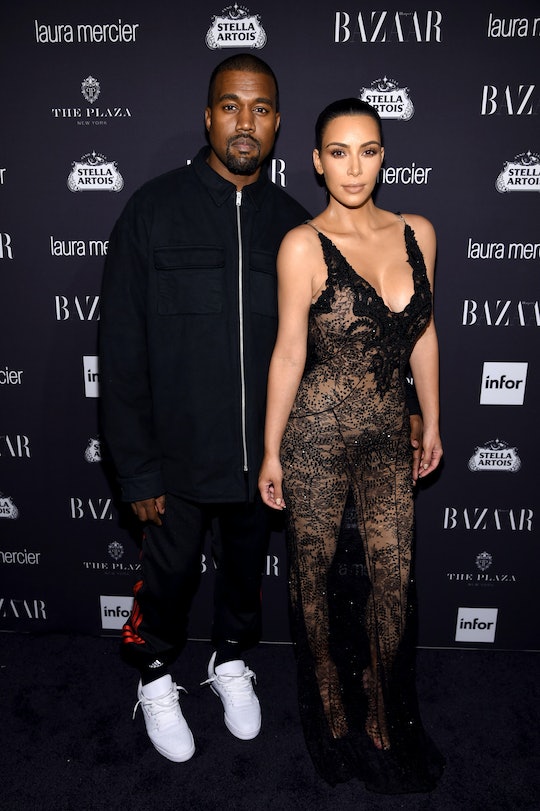 Kim & Kanye Released The *Sweetest* Message About Their Newborn Daughter

Kanye West and Kim Kardashian West have welcomed their third child via surrogate. Their baby girl was born in January 15, and so far their joint statement is Kanye West's only reaction about baby no. 3. In her app, Kim said:

So far that seems to be the only statement from the Kardashian West family, which makes sense: their newest addition joined them at 12:47 A.M. on January 15, according to E! News, so they're probably pretty busy at the moment. No information has been released aside from the baby's gender and birthdate (and the fact that she was 7 pounds, 6 ounces when she was born), so fans will have to wait on further details, like her name.

Though there are two Twitter accounts claiming to be Kanye (with the handles @OfficialKanye and @KanyeOfficial), neither features the blue check that marks them as verified. That could be because Kanye deleted his social media accounts back in May 2017, so any and all information about his family would have to come from Kim's still active accounts.

Kim announced that she and Kanye were expecting another child in September 17, when it was revealed in a promo for Keeping Up With The Kardashians. That was also where Kim discussed the possibility of using a surrogate, something she and Kanye eventually decided to do. "I'm definitely leaning more towards I want to try..." she said on the show, as reported by E! News. "After talking to Kanye, I think I always knew that surrogacy was an option, and now I feel like that's my reality. I feel like surrogacy really is the only other option for me."

According to Kim, both she and Kanye wanted to have more children, especially after her harrowing experience in Paris. "I'd just love nothing more than to expand my family and just know that I have this world at home that is safe," she explained, going on to say that she wanted her children to have a support system if anything happened to her. However, her previous pregnancies (North was born in 2013 and Saint in 2015) had been difficult because of health concerns and carrying another child herself could have been risky.

Kim was open on her website about her previous difficulties, which included preeclampsia that resulted in North being born six weeks early. During North's birth, Kim suffered placenta acreeta, which is when the placenta is still attached to the uterine wall. Kim described the removal as an incredibly painful process and later had to have surgery because some of the placenta was still inside her body. That left her at increased risk with future pregnancies, leading to the decision to use a surrogate. As Kim told her mother Kris on KUWTK, "I've come to the conclusion in my mind that I can't carry another one. So now I want to explore surrogacy."

Following the birth of their third child via surrogate, Kim and Kanye expressed gratitude to their surrogate, as well as to the medical team that provided them with care during the birth. More details are sure to be forthcoming, whether they're released on Kim's app or saved for a future episode of her reality show. Until then, the Kardashian West family is probably enjoying their time together as a family.