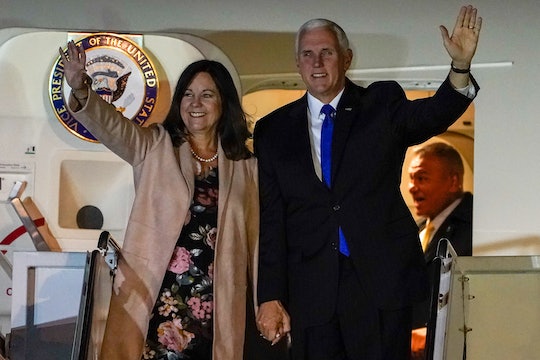 As the wife of the nation's vice president, Karen Pence has certainly had to adjust to living more of her life in the public spotlight, and as such, you might think that may have influenced her to keep some of her more controversial beliefs under wraps. But on Wednesday, NBC News reported that Karen Pence is teaching at an anti-LGBT school part-time. Not only is it disappointing that the wife of the vice president has opted to teach at a private religious school instead of putting her years of teaching expertise towards helping students in America's public school system, it's also an obvious slap in the face to all the LGBT Americans her husband is still supposed to be serving, by reinforcing such blatantly-discriminatory views.

In a statement released by her office, Pence explained that she is teaching art to elementary school students two days a week at the Immanuel Christian School in northern Virginia, according to CNN, and said, "I am excited to be back in the classroom and doing what I love to do." It actually sounds like the job will be a bit of a homecoming for the second lady: Pence taught at the Immanuel Christian School for 12 years out of the 25 total years she has spent in the classroom. But Pence's own excitement aside, the concern lies in the fact that the school requires its teachers to "live a personal life of moral purity," according to NBC News, which includes barring employees from engaging in or condoning "homosexual or lesbian sexual activity," and recognizing "transgender identity."

In fact, it's very clear that the school itself doesn't even sort of waver when it comes to its anti-LGBT policies. While the school's employment agreement, according to The Huffington Post, considers "moral misconduct" to include things like premarital sex, cohabitation before marriage, "extramarital sex," and the "use or viewing of pornographic material or websites," it also made sure to specifically call out all "homosexual or lesbian sexual activity," transgender identity as a whole, *and* a blanket warning regarding anything else they may deem a "violation of the unique roles of male and female."

But that's not all: further in the application, according to The Huffington Post, the school explicitly promotes the belief that "marriage unites one man and one woman," and that "a wife is commanded to submit to her husband as the church submits to Christ."

Given that the Pence family also previously enrolled their daughter, Charlotte, in the school, according to The Huffington Post, they are likely well-acquainted with the school's "Parent Agreement" which notes that the school can "refuse admission ... or discontinue enrollment," for any student if it deems "the atmosphere or conduct within a particular home, the activities of a parent or guardian, or the activities of the student are counter to, or are in opposition to, the biblical lifestyle the school teaches," according to NBC News.

Pence's communications director, Kara Brooks, has since hit back at criticism over the news, by saying that the vice president's wife should be commended, not chastised, and told CNN that, "It's absurd that [Pence's] decision to teach art to children at a Christian school, and the school's religious beliefs, are under attack."

Judging from the reaction on social media though, most people weren't buying it:

As much as it may be easy to say that Pence should be allowed to do whatever she wants, the fact is that her husband is the nation's vice president. And while it's definitely never been a secret that he is anti-LGBTQ and anti-reproductive rights, Karen Pence's decision to specifically choose an employer that is openly discriminatory to LGBTQ Americans serves as a further reminder that the couple second in line to run the country doesn't actually believe that everyone deserves to be treated with respect and compassion.

Add to that the fact that she's now also signing on to perpetuate those beliefs by teaching them to young children, when she could otherwise be encouraging them to grow up with a belief in acceptance and inclusivity? It becomes pretty easy to see why so many people are finding her choice to be so problematic.