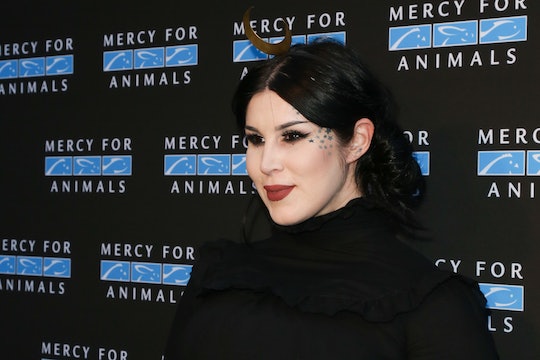 Celebrity tattoo artist, make-up mogul, and new mom Kat Von D has decided to clear the air about two issues that have totally snowballed over the past few months. She recently took to YouTube to discuss the controversy with fans and critics alike. And it all came spilling out in her 11 minute monologue. Kat Von D denies she's anti-vaxx and addresses Nazi rumors in an emotional video.

Kat Von D gave birth to her son, Leafar Von D Reyes, late last year, per E! Online, and felt that now was the time to clear up some controversy. She spent no time beating around the bush and goes straight to the point.

"Just to set the record straight from the beginning, I want to say I am not anti-Semitic, and I am not an anti-vaxxer," she said in the video.

"What I am is a first-time mother ... I read everything, from ingredients in food to cleaning supplies to medicines, basically anything that is going in my baby or on my baby I research like a total nerd," the makeup mogul added later on in the video. "... After doing a bunch of research and reading the ingredients, naturally I experienced some hesitancy."

She also addressed her now-deleted Instagram post where she mentioned she would not be vaccinating her son.

"If you don’t know what it’s like have people around you think you are ridiculous, try being openly vegan," she wrote, according to USA Today. "Try being an openly pregnant vegan on Instagram, having a natural, drug-free home birth in water with a midwife and doula, who has the intention of raising a vegan child, without vaccinations."

Vegan, drug-free, home birth, doula — those word were not the problem. Her mention of raising a child "without vaccinations" was.

The backlash on this was swift, with some fans calling for a boycott of her make-up line, according to BuzzFeed.

Not vaccinating a child leaves them susceptible to a laundry list of viruses and diseases, according to Healthline. If they are infected, they can spread it to other people who've not been vaccinated or have weakened immune systems.

Hence, the uproar from people from every corner of the web. It's still unknown as to whether or not she plans to vaccinate her baby. She said in this new video that she is choosing to keep medical decisions regarding her son private.

Kat also discussed her alleged link to Nazism. Before she left the set of Miami Ink, Kat left headshots behind. In the video, Kat said that an anti-Semitic message was forged on a headshot, as Yahoo Entertainment reported. And she couldn't take all the hateful messages that have continued coming her way.

"I have a son now," she said. "Seeing all these awful comments and the things that people are saying — I can't just sit around and pretend like it's gonna go away. And it sucks that over this last decade every time this 8x10 comes up I have to be reminded of this really awful, traumatizing time."

This isn't the first time Kat has been accused of having Nazi ties. Her former boyfriend, Jesse James was photographed giving a two fingered salute and wearing a Nazi hat, according to HuffPost.

Another purported episode of potential Neo Nazism was the planned release of a 2015 lipstick shade, called Selektion, which also happens to be the name of the Nazi practice of death camp practice of 'selecting' those to be executed as ABC News reported, according to USA Today.

While she didn't mention the person who was responsible for the alleged forgery, she did have some strong words about how it affected her.

Von D, who is also celebrating nearly 11 years of sobriety, as she mentioned in the video, said this in regards to all the hateful comments she's been receiving:

"Karma has a beautiful way of dealing with a lot of this stuff, and in all honestly, I just want to move on ... Yes, I should have talked about this when it was happening, but I didn't have the support that I have now."

It seems that Von D is really being open about what these reactions from fans have meant to her, judging from the emotion she seems to be showing in the video.

But as soon as the video was published, people took to Twitter to share a few choice opinions. And, it looks like some were not satisfied with her explanations.

There's no telling what the future will bring. Fans won't know if she vaccinates her son or not, as she's chosen to stop sharing such information on social media. As for the Nazi accusations, it might be a continued case of he said, she said. One thing is for sure, though: Being a mother is hard, no matter who you are.