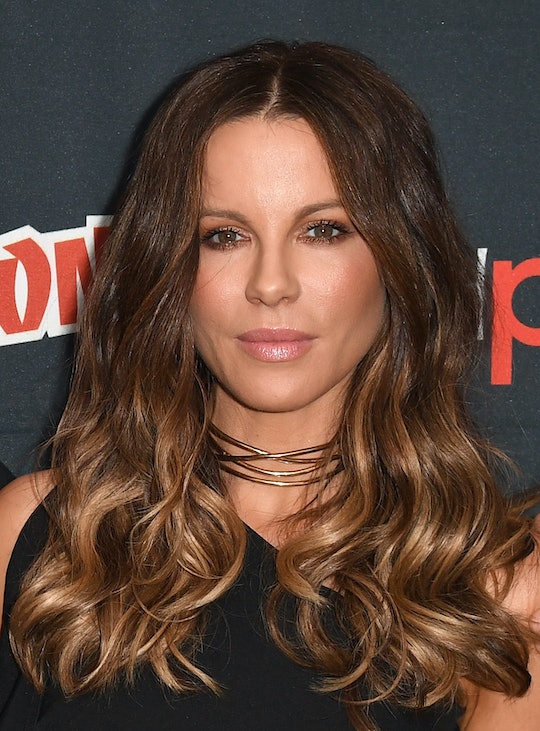 One of the most memorable moments from Wednesday's night's final presidential debate was during the immigration section of the program. Trump referred to many illegal immigrants as "bad hombres," which didn't just launch an avalanche of criticism, but also some hilarious hair memes worth another look. The "ombre" hairstyle which is pronounced the same as the Spanish "hombre" quickly became a punchline. And one of the most famous actresses to ever rock the ombre look was quickly dragged into the conversation. Kate Beckinsale's "bad ombres" comment is too great and brought a little levity to a dreary debate night.

It all started on Twitter with Bailey Kircher who did a quickie search of ombre hair to share. And of course, Kate Beckinsale's epic ombre hair came up first. So she made a collage of ombre hairstyles to do a bit of A-plus trolling of Trump's comment. Who would have thought Beckinsale would actually see it? Welp, she did, and her reaction was priceless.

Beckinsale shared the tweet on her own Instagram feed with the cheeky comment "Well, shit... now what?" How's that for a sense of humor about the whole thing? Well played. The post has received more than 7,000 likes.

Bailey Kircher, the original author of the tweet left a message on Beckinsale's post apologizing, saying "Sorry @katebeckinsale they were the first pictures to show up on Google!"

Kircher also apologized on Twitter in case there were any hard feelings, although it seems like Beckinsale thought it was pretty funny too.

Over the course of Wednesday evening and into early Thursday morning, "bad ombre" had turned into a full-fledged internet meme.

Some are thinking about using it as a Halloween costume idea.

Two debate memes came together into this image of Ken Bone from the second debate, with a bad ombre.

Even Jared Leto got caught up in the fray.

The Kardashians took plenty of incoming fire too.

Even Merriam-Webster, of dictionary fame, got in on the discussion with this tweet linking to a full explainer of hombre versus ombre. Helpful.

But no one came off quite as well, or as sharp as Beckinsale, who is known for a wicked sense of humor. If only the candidates could be so cool.

But all the laughs were just a diversion from what Trump was actually saying during his "bad hombres" remark, which came after he discussed his proposition to deport of millions of undocumented immigrants in the United States, according to NBC News' coverage of Trump's dark September immigration speech. Trump launched his campaign with a similar line of attack against Mexican immigrants, if not as entertaining. During his announcement that he would be running for president, he said, according to the Washington Post:

"Bad hombres" is just another iteration of the same message that has run throughout his campaign. The "ombre" memes were a nice diversion from Trump's ugly rhetoric, and Beckinsale just helped put a nice bow on the end of a particularly racially charged chapter of American presidential politics.

And for what it's worth, I think her hair is gorgeous.