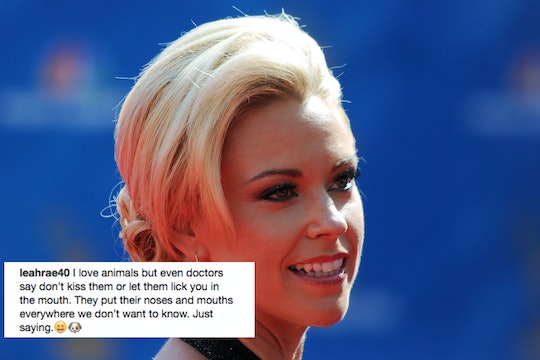 Another day, another controversy on social media. This time Kate Gosselin is at the center of a mini-scandal and the reason why might make you roll your eyes. Apparently, people are losing it over this photo of Kate Gosselin's daughter and their dog. As it turns out, many of Gosselin's fans have strong opinions about whether it's OK to give your dog a smooch here and there.

For some reason, Gosselin is a celebrity people either love or hate. If I had to place a bet as to why this is the case, I'd assume it has to do with the fact that Gosselin is a very opinionated person. Gosselin, a single mom to eight kids, never shies away from expressing her thoughts on parenting and family values. Although some people appreciate Gosselin's honesty and strong convictions, others think she takes it too far. Not to mention, a lot of fans still associate her with the show that made her famous, Jon & Kate Plus 8.

In the series, Gosselin was primarily portrayed as a nagging wife to her ex-husband, Jon Gosselin, and she was often depicted as an overbearing mom. And it appears Gosselin has struggled to shake this image because her posts on Instagram regularly spark controversy. Case in point: Some people are flipping out over a pic Gosselin recently shared of her 13-year-old daughter, Alexis, kissing their German Shepherd, Mak.

The love between my human children and my furry children continues to melt my heart on a daily basis! Mak just can’t love us enough — and we feel the same about him! We adore him! #Alexis #Mak #KingGermanShepherd #NanuqsBrother #ShokasSon #LoveMyKids.

Fortunately for Gosselin, most of the responses to her snap were positive. Many people love kids and dogs, and it's difficult to go wrong with that combo.

"These pictures are beautiful I love how much she loves all animals," someone gushed. "Mak is gorgeous." "Though animals can’t “speak” to us they sure express their unconditional love in many ways," another person chimed in. One fan, who was especially moved by the pic, penned: "That is so sweet! German Shepherds are the best. We lost our Meiko almost one year ago. We loved her & man, did she love her girls!"

Others, however, were quick to point out the supposed dangers of kissing dogs.

In a comment that escalated very quickly, someone wrote: "Very sweet. I let my fur baby kiss me like that. But it can cause open sores and even lead to death." Another commenter added:

I love animals but even doctors say don’t kiss them or let them lick you in the mouth. They put their noses and mouths everywhere we don’t want to know. Just saying.

"For someone who was such a germaphobe I’m surprised you allow your dogs to lick your kids mouths," someone else pointed out.

So, is it really that risky or dangerous to kiss your dog? A quick Google search of "is it ok to kiss a dog" (my search history just got a lot more interesting) proves the answer is a bit complicated.

If you're a generally healthy person, there's no major danger to giving your dog a peck. Although Clark Fobian, the president of the American Veterinary Medical Association admits that dogs carry “a large number and a wide variety of bacteria,” according to WebMD, healthy people typically won't get sick after coming into contact with these germs. Fobian also advises pet owners to keep track of their dog's whereabouts, actions, and medical state.

For instance, if you catch your dog eating your infant's diaper (my childhood dog had a bizarre fondness for diapers), you probably want to give them a thorough cleaning before planting a kiss on their mouth. In another scenario, avoid kissing your dog if you know they're battling an infection at the moment. I'll spare you the gross details, but parasites can be transferred from dog to human contact, according to LiveStrong.

That all being said, if you and your dog are healthy, you shouldn't hesitate to show your pet a little love if that's your thing.

As for Gosselin sharing this pic of Alexis and Mak, I bet she meant no harm by it or even thought twice before posting it. I also doubt that Gosselin would put one of her kids in a dangerous situation, so it might be best if her well-intentioned fans put a lid on the medical advice for now. At the end of the day, Gosselin's photo is just a sweet reminder of the love that exists between a kid and their dog.

More Like This
10 Parenting Lessons From Abbott Elementary That You'll Want To Write Down
Kim Kardashian Stars In Hilarious House Of The Dragon Parody, The Targashians
Lifelong Teacher Dr. Jill Biden Loves Watching Abbott Elementary Too
Prince George Reportedly Got Sassy In A Fight With A Classmate