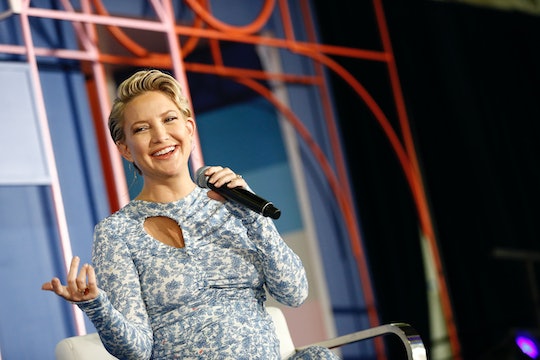 Back in October, Kate Hudson welcomed her first daughter with boyfriend Danny Fujikawa. Rani Rose joined older brothers Ryder, 15, and Bingham, 7, and it seems that in the months since, the family has been adjusting to their new life as a clan of five. But in a recent Instagram post, Kate Hudson explained her "genderless" approach to raising daughter Rani, and how it differs from raising her older sons.

For context, earlier this month, Hudson did an interview with AOL in which she explained that her "approach" to parenting is different with a daughter, as opposed to her sons. "There's definitely a difference," she said. "I think you just raise your kids individually regardless — like a genderless [approach]. We still don’t know what she’s going to identify as. I will say that, right now, she is incredibly feminine in her energy, her sounds, and her way. It’s very different from the boys."

However, some people didn't quite understand what Hudson meant by that, and continued to ask clarifying questions (and let's be honest, troll her about it too — it's the internet, unfortunately). That's why she took to Instagram to clear up some of the misconceptions, and TBH, it was kind of refreshing.

"Recently someone asked me something along the lines of, if having and raising a girl is different from boys," People reported Hudson began. "My response was simple. Not really. The whole click bait tactic of saying I’m raising my daughter to be 'genderless' is silly and frankly doesn’t even make sense."

"Me saying a 'genderless approach' was a way of refocusing the conversation in a direction that could exist outside of the female stereotype. It just felt a little antiquated to me. Not all girls want to be a princess, some want to be king. And that’s fine by me."

Ultimately, she clarified that though some people wanted to put a certain spin on her words, she wants to be honest and straightforward about what she really meant. "Some want to take the headline earnestly as if I have some new age method of raising my kids and I really do hate disappointing people but, I don’t," she said. "I just try to raise my kids to be good people with the best tools to face this big crazy world."

Hudson then disabled the comments on the post — which was likely a wise move — so it's hard to say how fans and followers are responding, but it's probably pretty positive overall.

Prior to having her daughter, back in 2016, Hudson told Today that she always loved being a mom, and that she sees parenting as her superpower.

"The best thing I probably do is [parent]. I’ll say I’m a pretty darn good parent. I’m going to pat myself on the back for that one. I got good kids," she said at the time. "Ryder’s turning out to be [a great kid] — I’m really super proud of him. And I had something to do with that, so I think parenting is where I feel probably my strongest."

Though she's added another kid to her brood, it's likely that Hudson feels even more strongly than ever that parenting is where she thrives. But to get to that point? She says, like anything, it's a process. "Honestly, it’s like trial and error. The first one is the guinea pig," Closer Weekly reported Hudson told Today earlier this year. "I’m definitely more responsible. I’m not messing up Rani as much as I messed up Ryder."

Regardless, it's clear that Hudson is an amazing mom and co-parent, and no matter how she decides to raise her family, we can all appreciate how transparent she's willing to be in the process.