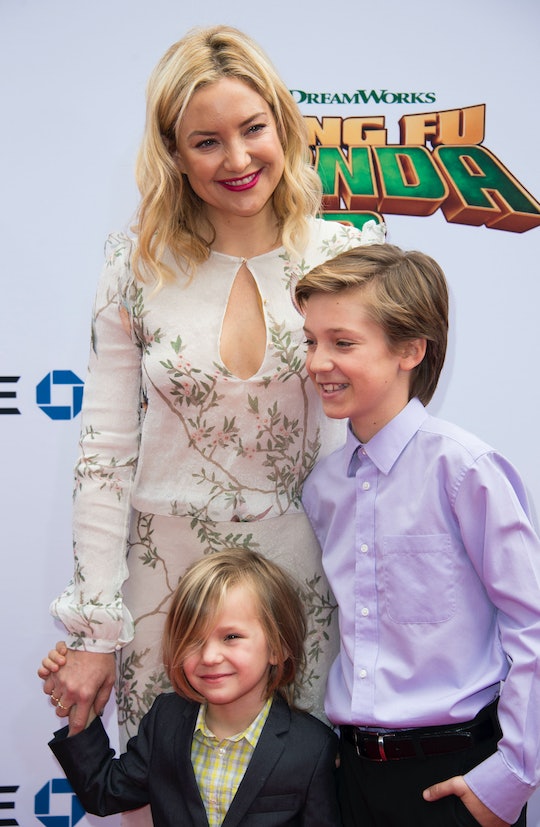 Kate Hudson Says She Feels Like A "Bad Mom," Something Most Moms Can Relate To

In an original essay for the May 2016 issue of InStyle, actress Kate Hudson writes that she feels like a bad mom sometimes. The essay is honest and open and makes no apologies. Because a lot of mothers often feel like they could be doing "better" jobs at parenting, even though no one really knows what they're doing. Hudson writes that as a single, working mother of two kids she goes back and forth between feeling like she should win"the best mom" award and that others times she finds herself "doing strange things in faraway corners in my house, and I realize I am literally and deliberately hiding from my children.”

Three cheers for organizing the utility closet in the basement on a snow day. Hudson, 36, has two children that she co-parents: Ryder, 12, with her ex-husband Chris Robinson, and Bingham, 4, with ex-fiancé Matt Bellamy. Despite being a celebrity, feeling like you need to run from your brood is something so many mothers can relate to. Whether you have a co-parent to pick up the slack, are a stay-at-home or working mother, every parent has moments where they just can't take it or fear that they're just not doing the right thing at all. And that honesty is not just refreshing, it's entirely real.

Kate, you are not alone, for sure. She also writes in the essay that she's also not into homework time or long division:

Yes, I help my kids with their homework. But I also get bored doing it. I will sit and listen to my children pontificate and discuss their ideas till the day is long because it warms my heart, but I really don’t want to do math! I’m gonna say it: I’d prefer to watch The Bachelor rather than do fractions and divisions.

She's also totally over apologizing for her conflicting feelings about motherhood.

Even though every primal ounce of the nurturing, domestic woman in me gets pulled, I’m a hunter as well. And I love to hunt! And as a woman I feel that somehow we are supposed to feel apologetic about wanting both. But I don’t want to apologize for that anymore. Being both already comes at an emotional cost, without adding society’s antiquated idea of the traditional roles of man and woman in the home.

Just because she (or any parent) hides in the bathroom or hates doing something with their kids doesn't make them a "bad" anything. Parenthood is tough, and comes with conflicting feelings. As much as Hudson is a "hunter," she also said that while she was away from her kids during her book tour for Pretty Happy, she felt this "this tight, pulling sensation that never goes away that comes at the cost of missing a week of my children's lives, and it aches," according to the New York Daily News.

With all of that emotional tug of war, who can blame her for wanting to sneak away sometimes? And who can shame her for feeling that way? Hint: No one.

More Like This
Dr. Jill Biden Just Delivered Some Frank, But Powerful, Advice On Motherhood
Reddit Applauds Mom Of Five Who Stood Her Ground & Left Sleeping Dad Behind
The Worst Fake Babies In The History Of Movies & TV That Will Always Be Unsettling
What Parents Need To Know About Hulu's Predator Prequel Prey