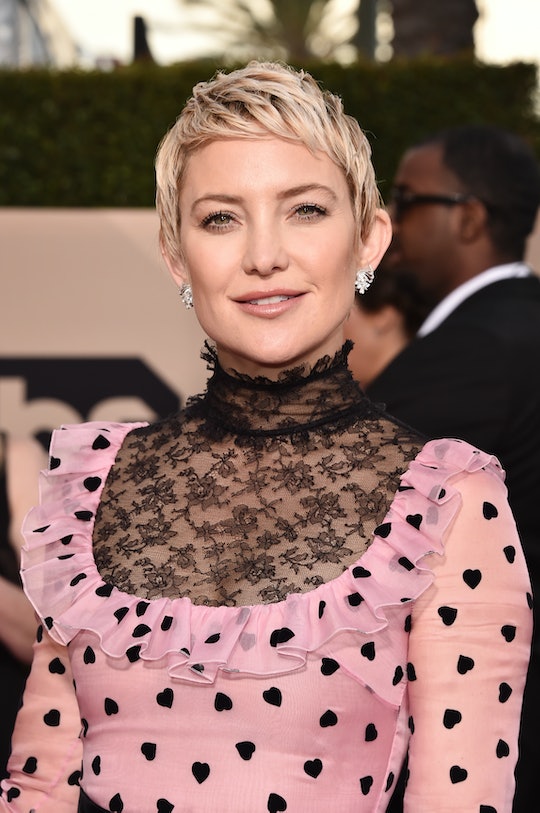 For many woman, the early weeks of pregnancy are filled with joy, excitement -- and vomiting galore. I mean, you have this life-altering secret that's making it difficult to concentrate on anything else. You're exhausted. Your emotions are on overdrive. The smell of your co-worker's lunch makes you want to hurl. (Heck, drinking water makes you want to hurl.) And yet, your work responsibilities beckon. But because you're not ready to spill the baby news to your boss quite yet, you're forced to pretend like you don't feel like curling up in a ball and sleeping all day long. And Kate Hudson's Instagram post about hiding her pregnancy at work during the first trimester is pretty much all of us.

As you've probably heard, Kate Hudson announced earlier this month that she's expecting her third child — and first with boyfriend Danny Fujikawa, Cosmopolitan reported. Hudson is already the mom of two sons, Ryder, 14, and Bingham, 6. So she's definitely no stranger to this whole pregnancy business. However, based on her most recent Instagram post, it seems the former How to Lose a Guy in 10 Days star suffered through a particularly rough first trimester. Alongside a looping video of her killing it on a yoga wheel, Hudson wrote, "First trimester photo shoot for @fabletics All I wanted was a bed and a bucket and all I got was a wheel ..." The expecting mama expertly followed this up with #TheSilentMonths. And all of the moms/currently pregnant women in the world simultaneously exclaimed, "Amen!"

So yeah, a fair amount of Hudson's Instagram followers could relate to her sentiments about how hellish the first trimester can be. "5.5 weeks right now and the bed and bucket sound like the best thing ever to me! You did way better in the first trimester than I’m doing!" one follower commented.

Another Instagram user chimed in with, "Yes!!! I was so sick my 1st trimester too...I could barely function and only wanted to be at home and near the bathroom! Happy to see you’re back on Instagram and feeling better now. Congrats on your little girl on the way!"

Yet another person blamed the actress' heightened morning sickness on the fact that she's having a girl this time around. "Girls = nausea," she commented. " I had it 24/7 with my daughter til about week 22."

Other Instagram followers were seriously impressed with Hudson's physical ability, despite how crappy she must have felt at the time. "Wow!! You're AMAZING!," a fellow mom wrote. "I was sick for 2 months and I never would have imagined you exercise much less doing that! I did stay on the couch with a bucket!! You inspire me!!"

Another person wrote, "The fact that you can do that is amazing!!! I'd be planting Face first into the concrete..."

One commenter hilariously compared Hudson's pregnant yoga wheel skills to what would likely happen if she attempted such a feat. "You can see her leg shaking," the commenter wrote. "Meanwhile I would’ve barfed and fallen not only off the wheel, but also rolled down the hill in the background. And died."

In case you missed the big reveal, Hudson not only announced her pregnancy on Instagram, but she also disclosed the sex of her third child with an adorable video, People reported. "SURPRISE!!!" Hudson wrote on Instagram on April 6. "If you’ve wondered why I’ve been so absent on my social channels it’s because I have never been more sick! It was the most sick first trimester of all my children." She continued:

Boomerangs have made me nauseous, Superzoom is an easy way to have my head in the toilet, food instagrams make me queezy and thinking too much about insta stories made me even more exhausted than I already had been. If you’ve seen me out and about smiling and pretending like everything is amazing...I was lying! BUT! I have broken through on the other end of that and rediscovering the joys of insta/snap.

In addition to sharing her excitement about having a daughter, Hudson seemed genuinely relieved that have everything finally be out in the open.

We have been trying to keep this pregnancy under the radar for as long as possible but I’m a poppin now! And it’s too darn challenging to hide, and frankly hiding is more exhausting then just coming out with it!

According to WhatToExpect.com, there isn't technically a "perfect" time to let employers know about a pregnancy. Many women opt to wait until at least the end of the first trimester/beginning of the second trimester, once the risk of miscarriage decreases. However, it might more sense for women experiencing severe morning sickness — or other pregnancy-related complications — to clue in their bosses earlier. And if you want to wait until your bump can no longer be passed off as a food baby, that's okay, too.

Although the first couple of months of pregnancy at work can definitely be rough, for me at least, letting my boss and coworkers in on my little secret felt like a weight was lifted off my shoulders. Because at least they knew why I looked like hell, was snacking on Cheez-Its nonstop, and running to the bathroom all of the time. Since Kate Hudson's first trimester is well behind her by now, here's to hoping she's feeling less nauseous — and less stressed out now that her baby news is out in the open.