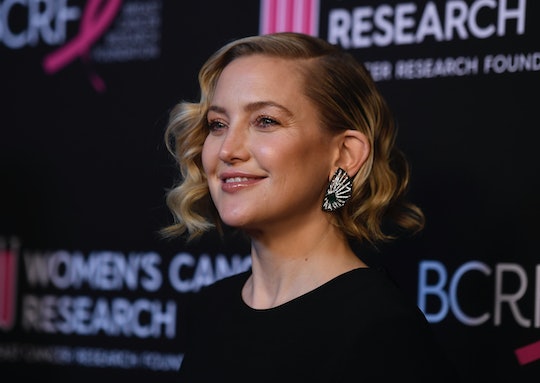 Kids grow up so fast and nobody knows this better than mom of three and actress, Kate Hudson. Before Hudson gave birth to her first daughter and third child, Rani Rose, last year, she was already a seasoned parent. But that hasn't made reaching milestones with her daughter any less exciting. Watching Kate Hudson's video of daughter Rani taking her first steps will make anyone smile.

Hudson's daughter with her boyfriend, Danny Fujikawa, is the cutest little girl. Rani (which is pronounced Ronnie, according to People) always seems to have a smile on her face and looks like such a chill and happy baby, all of the time, judging by Hudson's Instagram feed. But their daughter might be a little less chill now that she is officially on the move. Over the weekend, Hudson took to Instagram to share a video of Rani taking her first steps, and the whole entire video is so worth watching.

In the video, Rani chats up a storm (in baby talk, of course) while wearing the sweetest onesie with her grandfather, Kurt Russell's face on it, and a pair of jeans. As she blabbers, she walks towards Hudson with an uncertain look on her face. Although the little girl might seem a little wary about this whole "walking" thing, Hudson's cheers in the background are certainly encouraging enough. "Walking into Friday with Snake.....#TGIF #AndShe'sOff," Hudson captioned the video.

Hudson's friends and followers can not get over how sweet this video is.

"That is the cutest baby," one commenter wrote.

"Oh my goodness that happened fast," another commenter observed. "Love the grampa onesie."

"Oh! Mine is a minute behind yours," actress Diane Kruger commented, making a note of her own daughter (who was born in November 2018, according to Us Weekly) and her progress.

Rani just turned a year old on Oct. 1, according to TODAY, proving that time goes by so fast. It seems like just yesterday when Hudson gave birth to Rani. But what a year it has been. In the past year, Rani has worn matching clothes with her mom, traveled with her parents, and has gotten in some major quality time with her siblings.

But, Hudson has said that things in her home can get a little out of hand at times with so many kids running around at once. During a recent interview with Grazia in August, Hudson joked that things can seem a little chaotic when it comes to her family. "I wish there was a perfect balance. The truth is, there's not," Hudson told the magazine, according to People. "I just take it day by day, you know?"

And it definitely sounds like Rani is giving Hudson (and her brothers) a run for their money. In September, Hudson told Access Hollywood that Rani is already taking after her. "The second they start interacting...she's amazing, she's pretty fierce, she's quite a personality," Hudson said. "This personality coming out is very strong."

Rani sounds like such a fun and fierce little girl. And now that she's taking her first steps and is mobile, it sounds like she's well on her way to taking over the world — or, at least, taking over her household.