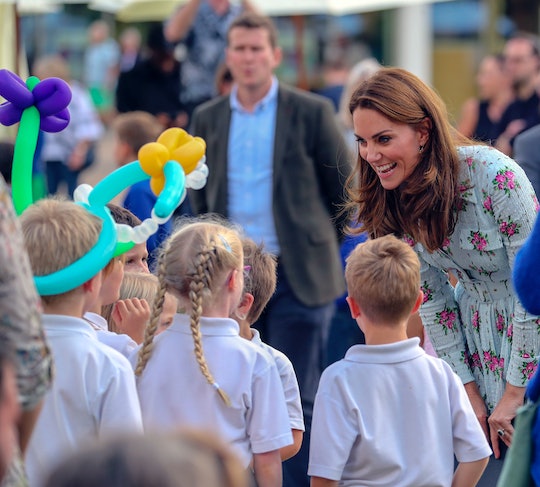 Sassy kids can be so adorable, especially when they're too young to fully realize their powers. This sentiment was on full display when Kate Middleton asked a little boy about his tiger face paint, a question that earned her a very cheeky response. Not only was it a classic moment, but it reinforced for me that I'm not the only one dealing with junior debate team champions (aka my children) all day when I ask simple questions. Kids say the darndest things, as the adage goes.

Stepping out in Surrey, England in one of her usual stunning floral numbers on Tuesday, the Duchess of Cambridge was ostensibly on hand to unveil her new public garden at the Royal Horticultural Society in Wisley. The garden is based on a smaller one she co-designed earlier this year for London's Chelsea Flower Show, the Daily Mirror reported.

In reality, however, she was there to get served by 3-year-old, Dylan Corbin. The young boy, who was at the event with mother Katie Vinton, 32, sparked Middleton's interest thanks to his tiger face paint. "'Kate asked, 'Are you a tiger?' and Dylan replied, 'No, it's just face paint,'" Vinton recalled, according to the Daily Mail. Ha!

Talk about a hysterical moment. Nothing beats an adult matching wits with a preschooler... and losing.

And although I wasn't there, I'm 100 percent sure Middleton took it in stride, since she has a full house of little ones herself. I'm sure Prince George, 6, and Princess Charlotte, 4, have had plenty of episodes of mischief (I'm not dragging little Prince Louis into this, okay? He's only 1.)

Jokes aside, Middleton's new garden is the latest example of her campaign to connect families with the resources they need to raise well-rounded kids in the modern age.

"As a parent, I have learnt just how important it is to foster our children's development, in all areas, not just physical, as soon as they are born," the Duchess of Cambridge told the crowd at the new launch, according to the Daily Mail. "By coming together, having fun, learning and experiencing new things, we can all impart life-long benefits on our children."

Middleton, who also previously helped break ground on children's play areas and gardens at Hampton Court Palace, got the chance to make the new garden installation even jazzier than last time, incorporating a hollow log, a wildflower meadow, rolling hill, and connected tree houses. The tree houses include slides so that even adults can get into the fun, according to the Daily Mail.

I love Middleton's mission to support families with children in those absolutely crucial early childhood years. And kid pro though she may be, England's reigning princess is still going royally lose some verbal jousting matches with kids, it just can't be helped.