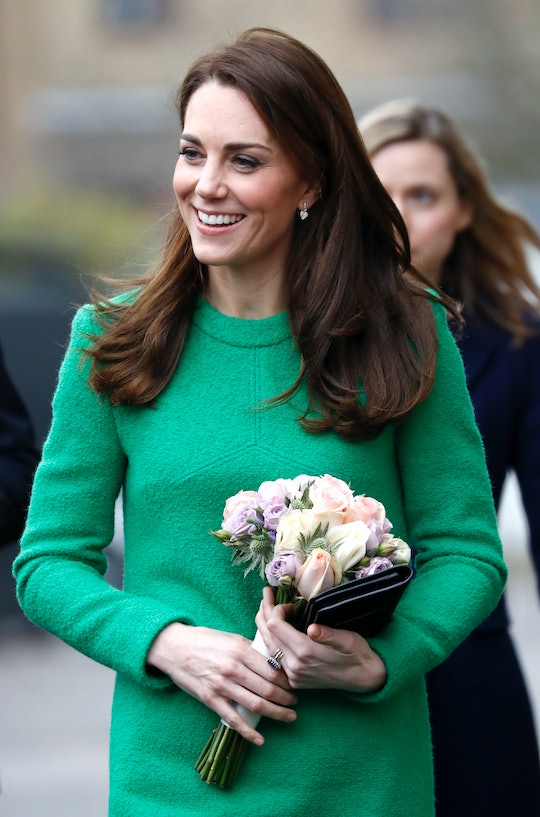 The Duchess of Cambridge has been busy the past few weeks, keeping up with all of her charity work. On one of her recent outings, according to People, Kate Middleton brought a family photo while visiting young students for a very heartwarming reason. It's clear that keeping up with families and children is a clear passion of Middleton's and it is always great to see her connecting with kids in such a sweet way.

On Tuesday, Middleton visited a pair of London schools to see how their students are taking care of their well-being, as the Daily Mail reported. Middleton did so in support of Children's Mental Health Week, which is run by one of her charities, Place2Be. According to the charity's website, Children's Mental Health Week launched in 2015, and this year, the week centered the theme "Healthy: Inside and Out," focusing on the connection between student's physical and mental health.

While visiting students at Lavender Primary School, Middleton joined students in an activity where they shared objects that represented something that makes them happy, according to Hello! Magazine.

As for Middleton, she brought a photo of her sweet family to share with the students, as noted on Kensington Palace's official Twitter account. It's really great to see Middleton participating in such a cool activity with students and knowing she decided to share a picture of her family with them makes it even better!

This is a photograph of my family. These are my children and this is my husband. And my family makes me feel happy. And we like playing outside together and spending lots of time together as a family, and that makes me feel very happy.

Connecting with kids around mental health is one of Middleton's passions. In fact, a palace source reportedly told The Mirror, "As a mother of three, the Duchess is determined to raise the profile of children’s mental health as one of her key roles in the Royal Family."

The photo Middleton choose to share shows her holding a smiling Prince Louis while sitting next to her husband, Prince William. Prince Charlotte and Prince George are behind their parents in the photo, smiling at the camera.

It's a really adorable picture, so it's easy to see why Middleton would decide to share it as something that makes her "happy." Plus, sharing a photo of her own family is a great way to connect with kids.

During her visit, Middleton also watched kids take part in the Daily Mile challenge and joined a group of parents talking about the challenges of setting up good routines around sleep, screen-time, healthy eating, and exercise, as reported by Place2Be.

"It's great to see how Place2Be's work in schools like Lavender Primary is helping children to understand and embrace the connection between healthy bodies and healthy minds," Middleton said, according to the charity's site. "As a mother, I feel it's so important that we encourage children to discuss how they feel and to help them take simple, positive steps to look after their well-being."

The work that Middleton is doing with her school visits is incredibly important. It's great to see her taking time to connect further with kids by talking about what makes her happy and sharing pictures of her family with them!