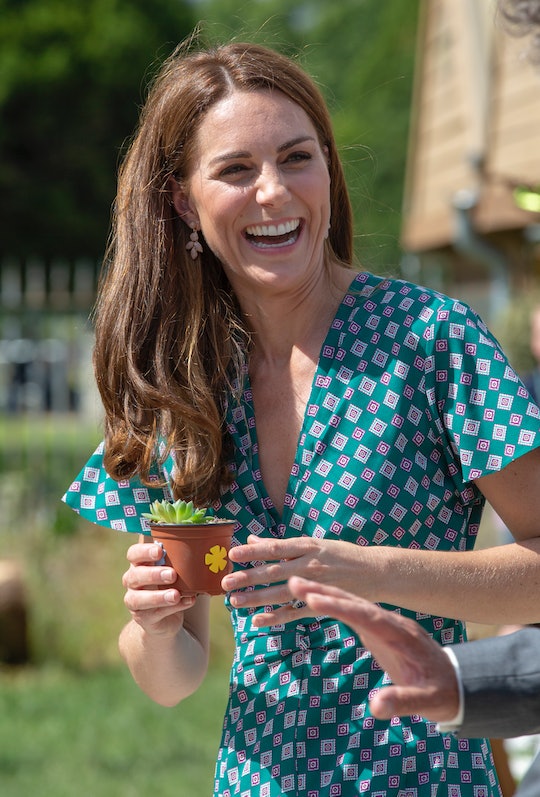 The Duchess of Cambridge continues to impress me, as she's frequently in the news for her charity work and advocacy. Not to mention, the mom is able to juggle a jam-packed schedule all the while being a thoughtful parent to her three kids, impressive traits she demonstrates often. Case in point: Kate Middleton designed her garden to include a sweet detail for Prince George, proving that she's all about those little "mom" details.

On Monday, the Duchess of Cambridge debuted an example of her play-and-learn garden at a new location at Hampton Court Palace (Hampton Court was famously King Henry VIII's residence, and it's about 11 miles away from central London on the River Thames, according to The Sun), about a month after it was first shown off at the Chelsea Flower Show in May.

Middleton hosted kids at the site of the new garden, which is where the world came to learn that a set of stepping stones in the project was designed with one particular person in mind — Prince George.

"We made the stepping stones because Prince George wanted them," Jake Catling, director of Landscaping Consultants, the firm that Middleton worked with to co-design the garden, told Hello! magazine. "The kids loved jumping across it and it was down to Kate we got that in."

The new garden is an extension of the "Back to Nature" garden and outdoor learning space that Prince George and his siblings, Princess Charlotte and Prince Louis, christened a month ago, with Hello! adding that the new space is larger and includes such objects of wonderment to a young mind as a waterfall and hollow logs.

During the festivities, the Duchess of Cambridge also talked about how Princess Charlotte helped her find materials for the new play yard. “There are eight, Charlotte helped me find them,” Kate told the kids as they went on a mission to gather objects using magnifying glasses, according to The Mirror.

The Duchess of Cambridge took young visitors from several local organizations around the new outdoor digs and she hosted a fun treasure hunt, with gardening expert Catling noting that Middleton was "very hands-on," according to The Telegraph.

He added, "It was fantastic. She came and did lots of planting and directing everyone around and got involved in the mulching." Yep, that sounds exactly like the Middleton fans across the world have come to know and love.

Wait, Middleton can mulch in addition to everything else?! I mean, is there anything this mom and world-influencer can't do? From photography to giving speeches, this mama has the whole superhero thing down pat.

Despite the fact that Middleton always seems to be on-the-go, she never forgets to think about her kids and the little things that would make them happy, like Prince George's stepping stones in the garden, for instance. It just goes to show she's a doting mom who will go above and beyond for her brood, no matter how small.

So, in addition to Kate Middleton's charitable efforts, I'll continue to admire the sweet and thoughtful relationship she has with Prince George, Princess Charlotte, and Prince Louis.

More Like This
Reddit Backs Mom Who Got Scolded By Teacher For Not Inviting 30 Kids To Birthday Party
Marie Kondo Gives Up Tidying Post-Kids, Sparking Joy For Moms Everywhere
10 Of Julia Louis-Dreyfus' Best Quotes On Motherhood & Raising Her Sons
A Parent’s Guide To Stomach Pain In Kids
What Parents Are Talking About — Delivered Straight To Your Inbox